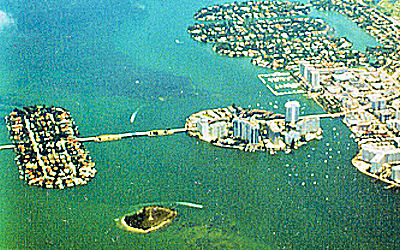 2.9nm
20°
Miami Beach occupies the barrier beach that separates the ocean from the upper part of Biscayne Bay and is also an important yachting center. A number of causeways, with bridges over the channels, form good highway connections with Miami and the mainland communities.
The city is ...
8 Apr 10
Joëlle

5.1nm
187°
Key Biscayne is an island located in Miami-Dade County, Florida, United States, between the Atlantic Ocean and Biscayne
Bay. It is the southernmost of the barrier islands along the Atlantic coast of Florida, and lies south of Miami Beach and southeast of Miami. The Key is connected ...
18 Apr 12
JB

20nm
188°
Elliott Key is the northernmost of the true Florida
Keys (those 'keys' which are ancient coral reefs lifted above the present sea level), and the largest key north of Key
Largo. It is located entirely within Biscayne National Park.
It is bordered by the Atlantic Ocean to ...
18 Apr 10
Joëlle

0.6nm
195°
Star Island anchorage is located off the Miami Beach Channel, between the eastern tip of Palm Island and the western shores of Star Island.
Minimum Depth: 6-feet
Good shelter, in all but strong northern winds.
7 Apr 10
Bjplan

0.5nm
29°
Located along the alternate Miami Beach Channel's westerly banks between the Julia Turtle and Venetian Causeway.
Sunset Harbour Yacht Club in Miami Beach Florida offers equity ownership in its state of the art large yacht mooring facility.
This dockage is for sale at a beautiful ...
11 Apr 10
Joëlle

0.7nm
216°
Located off the Miami Beach Channel, on the waters lying between the southern shores of Palm Island and Mac Arthur
Causeway.Minimum
Depth: 6 feet
Excellent shelter in all but very strong western winds.
7 Apr 10
bjvlb