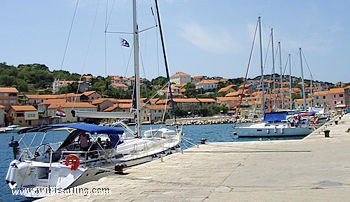 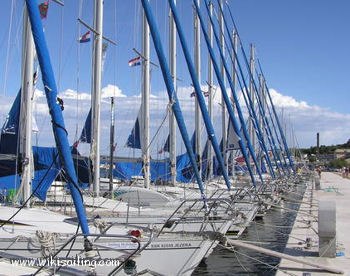 23nm
353°
Kanal Nove Povljane, entered between Otok Vir and the SE end of Otok Pag, leads 5 miles SE into Ninski Zaliv.
Shoals at the inner end of this channel restrict the fairway to a width of about 250m, with a controlling depth of 8m. Vessels with a draft of over 6m are advised not to ...
23 Jul 11
Jojo

15nm
332°
Rivanjski Kanal continues NW from the N end of Srednji Kanal and leads between Otok Rivanj andOtok Sestrunj.
It is generally used by vessels proceeding between Srednji and Zadarski Kanals.
Otocic Tri Sestrice, a group of islets and rocks, extend up to 2 miles NW of Rt Zanavin, ...
9 Sep 11
Jojo

21nm
3°
Ninsko-Ljubacki Kanal, a tortuous channel, connects the SE end of Kanal Nove Povljane with Ljubacka Vrata. This channel leads through the deep inlets which indent the SE coast of Otok Pag, on the NW side, and the mainland, on the SE side.
It is entered between Rt Prutna,which is ...
23 Jul 11
Jojo

21nm
113°
The island of Murter is the largest island of the Sibenik archipelago. It is close to the coast on which it is connected by a bridge, low air draft at Tijesno (Tisno) on the continent. During the summer the bridge opens to allow passage of boats.
The NW part of the island is fertile ...
3 Apr 11
Jojo

16nm
107°
Vrgadski Kanal, 7 miles long, leads between Otok Murter and Otok Vrgada and is the principal channel used in the S approach to Pasmanski Kanal and Zadar.
Vessels with a maximum draft of 6.4m may pass through Pasmanski Kanal. Vessels with drafts over 6.4m must either proceed through ...
16 Jul 11
Jojo