This large bay, located SW of Novigrad, between Cape Point and Meja Zub wearing a headlamp.
Attention, from the N at high-tide "Plicina Val" marked by a buoy unlit face in Novigrad.
2012/07/23
Update
Jojo 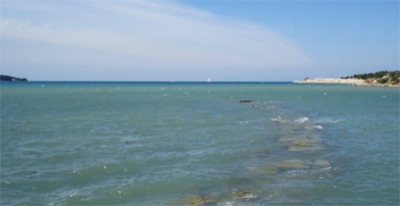 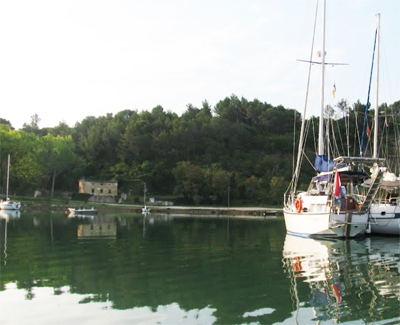 15nm
14°
Koperski Zaliv (Baia di Capodistria) is entered between Rt Ronco and Rt Debeli, 5 miles NE.The NE and SW shores of the bay are hilly, but the shore at the head of the bay, through which the Fiume Risano flows, is low. Monte Sermino, surrounded by salt beds, rises isolated in the river ...
28 Aug 11
Jojo

11nm
355°
The Gulf of Piran or Piran Bay (Slovene: Piranski zaliv, Croatian: Piranski zaljev or Savudrijska vala, Italian: Baia di Pirano) is located in the northern part of the Adriatic Sea, and is a part of the Gulf of Trieste. It is between Rt Madona at N and Rt Saudrija.
It was named ...
28 Aug 11
Jojo

7.8nm
181°
Warning: From Porec to the entrance to the Limski kanal there are a large number of dangerous shoals and rocks.
On the N side of Funtana bay is the Janjci shoal, its northern edge is marked by a black post with two red bands and topped with two black spheres.
At the southern ...
29 Aug 11
Jojo

11nm
160°
Limski Kana is entered between Rt Kriz, located 2.4 miles NW of Rovinj, and Rt Sjole, 1 mile NNW.
The Lim bay and valley is a peculiar geographic feature found near Rovinj and Vrsar on the western coast of Istria, south of Porec, Croatia.The Lim valley is the 35 km long valley ...
31 Aug 11
Jojo

12nm
175°
From Rt Kriz (located S of Limski Kanal entrance), there are some shoals and islets. In front of Rt Muca are Figarola islet and Hr Figarolica at SW from it. Plic Muca, under 7/8 m of water, and Plic Skver, under 10 m of water, are off Rt Muca, NW of Uvala Valdenora, between Rt Muca ...
1 Sep 11
Jojo

24nm
164°
The Brijuni or the Brijuni Islands (also known as the Brionian Islands; Italian: Brioni) are a group of fourteen small islands in the Croatian part of the northern Adriatic Sea, separated from the west coast of the Istrian peninsula by the narrow Fazana Strait. The largest island, ...
2 Sep 11
Jojo