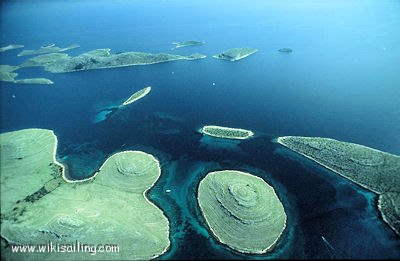 The Kornati archipelago is a group of islands located in the center of the Dalmatian coast, south of Zadar, between Zadar and Sibenik. This is the densest archipelago in the Mediterranean, it has 150 islands and islets (most uninhabited) on an area of ​​320 km ². Croatian proverb says of course there are as many as days in the year.
Melting glaciers and rising sea levels after the last ice age 20,000 years ago, made an archipelago, shaped by the erosive power of the sea and the wind has laid bare thin streaks of limestone.
A century ago, residents of neighboring islands have built these stone walls to pen their sheep and isolate cultures of olive and vine. Overexploitation of scarce grassland greatly impoverished the land and wildlife.
Kornati mean crown, the Kornati "islands crowned" as the edge of each island, there is a border of stones from the sky and it forms a ring.
The Kornati archipelago consists of four groups of islands:
Zut
Kornat, the largest island
Piskera
Smokvica
The unique feature of the islands lies in their rugged shores with many caves and coves.
The Kornati National Park were classified national park in 1980 and are among the most visited sites of the Croatian Adriatic. By the end of the afternoon, the sailboats moored for the night in a cove nearby, become possible companions of the evening.
The island is popular with boaters for which two water sports centers have been built in the Bay of Telascica, marinas and Piskera CYA Damn.
Electricity. The Kornati are not connected to the network Croatian. The lamps are powered by solar energy, stove and refrigerator are powered by gas.
Water. It is usually provided by a cistern that collects rainwater. If necessary, it is filled with the passage of the tanker.
Supplies. The boat store, which runs twice a week, does not offer a very wide range of products. Fishermen sometimes sell from island to island fresh fish. We can catch yourself by paying a license (35 € for seven days). Also possible to hire fishing equipment (30 €).
The waters of these islands are lunar fish and supports a rich underwater flora. Warning spear fishing is prohibited.
Boaters wishing to visit the Kornati islands must buy their ticket in one of two centers:
Port of Zakan on the island of Ravni Zakan (south-east of the park)
Vruja in the Bay on the island of Kornat (north-west of the park)
There you can buy tickets for boats and recreational fishing license or scuba diving.
Anchoring and camping on your boat is permitted only in specifically identified 16 bays. The islands where he shall set are those of Klobucar, Mrtvac, Veli and Mali Obrucan.
All S islands, boaters must stay at least 500 m of Velika Purari and reefs teeming with Klint and Volicer.
2011/07/15
Update
Jojo

0.8nm
98°
The island of Kornat is the largest island of the group of islands that create the National Park Kornati, it gave its name to the archipelago.
Kornat, with several prominent peaks, lies SE of Dugi Otok and is separated from it by Prolaz Proversa, a narrow channel, which is obstructed ...
16 Jul 11
Jojo

2.9nm
349°
6NM long (NW/SE) Zut  is the second island of Kornati. It is located NE of O. Kornat which protects it from onshore winds.
There are no people except the people of Murter who come from time to time.
The coast is steep and cut, there are beautiful bays such as Luka, Hiljaca, ...
16 Jul 11
Jojo

12nm
90°
The island of Murter is the largest island of the Sibenik archipelago. It is close to the coast on which it is connected by a bridge, low air draft at Tijesno (Tisno) on the continent. During the summer the bridge opens to allow passage of boats.
The NW part of the island is fertile ...
3 Apr 11
Jojo

17nm
120°
Otok Zirje is the farthest and the largest island in the Sibenik archipelago.
It is long of 6,5 NM (NW/SE) and 1,4 NM wide.
The main village, Zirje, is located in the middle of the island. A small port, luka Muna, on the coast N of Zirje, home to the ferry that connects the ...
16 Aug 11
Croatia

9.2nm
68°
Vrgadski Kanal, 7 miles long, leads between Otok Murter and Otok Vrgada and is the principal channel used in the S approach to Pasmanski Kanal and Zadar.
Vessels with a maximum draft of 6.4m may pass through Pasmanski Kanal. Vessels with drafts over 6.4m must either proceed through ...
16 Jul 11
Jojo