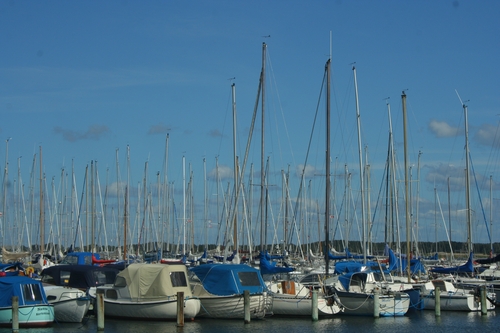 12nm
125°
Sprogø LighthouseThe first lighthouse on Sprogø was built by the postal services in 1809 for the demarcartion of the sea route between Sjælland and Fyn. In 1854 it took over lighthouse administration old post lighthouse, which in 1868 was replaced with the current good ...
15 Dec 09
holger

19nm
348°
Vesborg LighthouseSamsøScenic conspicuous Samsø lighthouse located on the old medieval voldsted Vesborg on Samsø southwest corner. In the middle of mounds built Mon lighthouse in 1857-58, where parts of the old moat lies around the lighthouse. It was built while Skagen gray lighthouse ...
30 Sep 10

27nm
358°
North-east of Samsøe Island, on the edge of the Stavnsfjord, is the small natural harbor of Langør. You can anchor in the bay to the east except in southerly winds.

18nm
21°
Revsnæs LighthouseWest of KalundborgRevsnæs lighthouse was built in 1844. After England 1807-14 war ships were increasingly way through the Great Belt and from the Baltics. Thereby avoiding the healthy to pay customs at Helsingør. In 1830 sent the 12 skippers in vain a letter to ...
22 Sep 10
dd

20nm
151°
Hov LighthouseLangelandOn the east side of Langeland's northern tip, this completely unique little lighthouse but has been and is very important for ship traffic through the Great Belt. It was turned on 15 December 1893. It is listed in Hasle clinker in a so-called monier construction ...
15 Dec 09
holger