This bay is on the north east coast of Oahu and is protected by the Mokapu Peninsula.

This bay is very calm and sheltered. Together with the crystal clear water, it makes a very attractive anchorage.

There are four marinas here as well as four anchorage areas.

Anchor in the North end of the bay.

To get in, you follow an S-shaped channel which meanders due west of the western end of first leg of the ship channel (228° true) into Kaneohe. you turn off of the ship channel about halfway between the pair of stakes (port and starboard) and the range mark at the end of the channel.
The southern edge of the channel is haphazzadly marked with stakes but the reef is so shallow that visual navigation is relatively easy in spite of somewhat cloudy water. The northern edge of the channel is less distinct and seems to be mostly sandbank.

At the end of the channel is a large basin of 4-meter deep water with a mud bottom. Holding isn't very good, but this can be compensated for with extra scope. The sand banks at the northern side of the basin appear to be 2 meters deep in some places and might offer better holding than the basin proper. 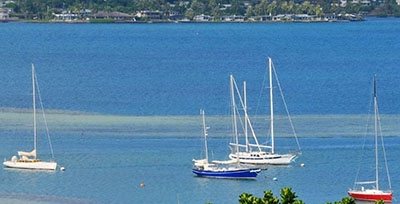 12nm
180°
Ala Wai Yacht Harbor is the largestyacht harbor in the state of Hawaii. Located at the mouth of the Ala Wai Canal, between world famous Waikiki and Honolulu, the Capitalof Hawaii.
The harbor is home to the Waikiki Yacht Club and the Hawaii YachtClub, which host junior sailing ...
7 Dec 15
Joëlle

11nm
194°
Keehi lagoon is a great place for canoeing and boating since the waters are usually calm in the protected lagoon.Many canoe clubs do their practice session here and outrigger canoe regattas take place from time to time. However, the man-made beach is not suitable for swimming, ...
7 Dec 15
Joëlle

14nm
304°
Waimea bay is located in Haleiwa, on the N shore of Oahu, at the mouth of the Waimea river. Waimea valley extends behind Waiema bay.Waiema means "red water" in Hawaiian.Captain Charles Clerke aboard HMS Resolution stopped at Waimea Bay on February 28, 1779. Clerke had shortly before ...
10 Dec 15
Joëlle