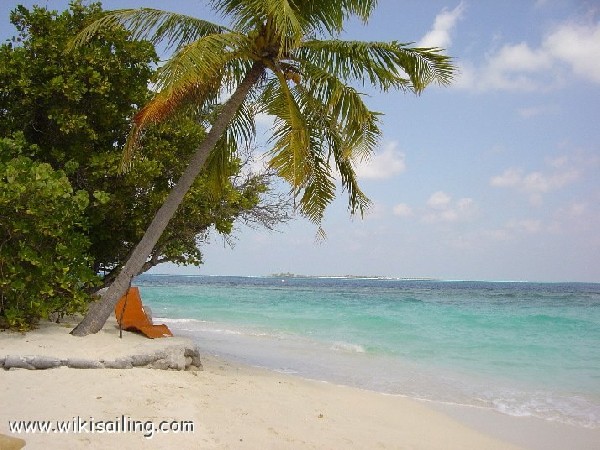 5.6nm
340°
Funadhoo (Funidu) lies about 0.3 mile N of the E end of Male, and is surrounded by a reef which dries in places.
A small tank farm, with three large and about six smaller tanks,stands on the island.
17 Nov 11
Jojo

7.1nm
11°
Hulule, about 0.6 mile E of Funadhoo, bears some tall coconut palms; an airstrip runs the full length of the island and joins it to an islet close S. Airport buildings and a small village lie along the central part of the W side of Hulule.
The Malé International Airport is located ...
17 Nov 11
Jojo

5.5nm
358°
Malé is the capital of the Republic of Maldives located at the southern edge of North Male' Atoll Kaafu.
Traditionally it was the King's Island from where the ancient Maldive Royal dynasties ruled and where the palace was located. Formerly it was a walled city surrounded by fortifications ...
16 Nov 11
Jojo

5.2nm
353°
South West Harbor is protected by a rough breakwater of heaped coral extending 0.15 mile from the SW extremity of Male.
The harbor is used by inter-island trading boats, cargo lighters, and deep-draft vessels at anchor.
The Custom House lies on the main quay facing the main ...
13 Nov 11
Jojo