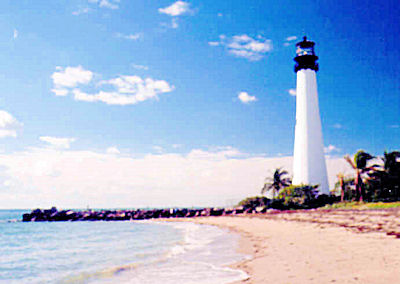 The
Cape
Florida lighthouse is one of the most celebrated landmarks owned by the State of Florida.
The original lighthouse and cottage, built in 1825, were attacked and burned in 1836 by Seminole warriors protesting
U.S. presence in the South
Florida wilderness and resisting deportation from Florida to the West.
When the lighthouse was rebuilt in 1855-1856, it was extended from 65 feet to its present height, and wooden stairs were replaced with 119 spiraling iron steps to the top.
2012/04/18
Update
JB

13nm
191°
Elliott Key is the northernmost of the true Florida
Keys (those 'keys' which are ancient coral reefs lifted above the present sea level), and the largest key north of Key
Largo. It is located entirely within Biscayne National Park.
It is bordered by the Atlantic Ocean to ...
18 Apr 10
Joëlle

2nm
348°
Key Biscayne is an island located in Miami-Dade County, Florida, United States, between the Atlantic Ocean and Biscayne
Bay. It is the southernmost of the barrier islands along the Atlantic coast of Florida, and lies south of Miami Beach and southeast of Miami. The Key is connected ...
18 Apr 12
JB

10nm
7°
Miami Beach occupies the barrier beach that separates the ocean from the upper part of Biscayne Bay and is also an important yachting center. A number of causeways, with bridges over the channels, form good highway connections with Miami and the mainland communities.
The city is ...
8 Apr 10
Joëlle

0.3nm
260°
Cape Florida Anchorage, with depths of 12 to 20 feet, is about 300 yards westward of the south end of Cape Florida with the lighthouse tower bearing northward of 069°. This is a poor anchorage with southerly winds.
18 Apr 12
JB

0.6nm
327°
Located on the waters of the tadpole-shaped harbor, which indents the westerly banks of south Key Biscayne, near
Cape Florida.The minimum depth is 10 feet and the shelter is excellent.
There is an overnight anchorage fee of $15.00, and a day use fee of $2.00.
It will be necessary ...
18 Apr 12
JB

1.1nm
225°
Biscayne Channel leads through the shoals south of Cape Florida into Biscayne Bay. It is partially dredged, but the channel has shoaled. In April 1983, the reported controlling depth was 5 feet.
The channel is marked by lights and daybeacons. Craft whose draft is close to the limiting ...
5 Apr 10
Bjplan