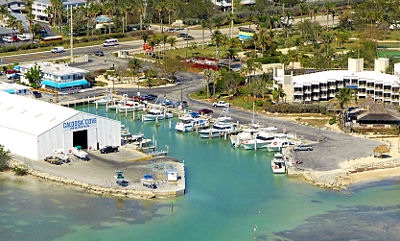 2012/04/16
Update
JB
This is the most unfriendly place on planet earth, full of red necks and white trash, the worst of the worst. If you are a sailor that respect yourself and the sailing community do not stop at this marina and give your dollars to this bunch of nasty human trash.
2014/02/12
Update

2.7nm
254°
Long Key was called Cayo Vivora (Rattlesnake Key) by early Spanish explorers, a reference to the shape of the island, which resembles a snake with its jaws open, rather than to its denizens.
In the early 20th century, Long
Key was the site of a luxurious fishing resort that ...
5 Apr 10
Joëlle

1.4nm
48°
The island lies to the southwest of Upper Matecumbe Key, and to the northeast of Craig
Key.
All of the key is within the Village of Islamorada as of November 4, 1997, when it was incorporated.
This key is the site of a number of Indian mounds and middens, most of which were ...
22 Mar 10
Joëlle

20nm
246°
Key Vaca is an island in the middle Florida
Keys, located entirely within the borders of the city of Marathon, Florida. It is often incorrectly identified as
"Marathon Key."Key Vaca is located between Fat
Deer Key and Knight's Key. Key Vaca is also connected via bridge to ...
22 Mar 10
Joëlle

1.8nm
43°
Anchorage located at South/southeast of the ICW's unlighted daybeacon #97.To avoid the 1 foot shallows of Peterson Bank, westbound cruisers must follow the waterway's track for another 6 M or so southwest of #97 before turning to southeast and heading for the bight.
Minimum depth: ...
22 Mar 10
Renée

2.4nm
240°
Channel Five is the second of the two marked passages spanned by the Lower Matecumbe Key-Long Key Bridge. It is an important route, not the least reason for wich is the full 65 feet of vertical clearance afforded by the fixed bridge that spans its width. This is the first ICW to Hawk ...
25 Mar 10
Bubal

3.8nm
32°
Lignumvitae Key is an island in the upper Florida
Keys. It is located due north of, and less than one mile from the easternmost tip of Lower Matecumbe Key.
The island has the Keys' highest point above sea level of 19 feet (5.8 m), which beats the island of Key West's
Solares ...
23 Mar 10
Joëlle