Arnala Island, 4m high with a fort on it, lies about 0.5 mile offshore, and is fringed by rocks on all sides. Shoal water, with depths of less than 5m, extends about 1 mile W of the island. Arnala Island has been reported to give good radar returns at 27 miles.
Arnala Light is shown from a white framework tower on the coast, abreast the S end of Arnala Island.
2012/03/1
Update
Jojo

10nm
158°
Dongri Point, the S entrance point of Bassein Creek, is a bluff point as seen from seaward. It rises to an elevation of 94m about 0.5 mile S of the point, and then slopes gradually to level country about 2 miles farther S.
A light is shown from about mid-September to mid-June.Poshpir, ...
1 Mar 12
Jojo

26nm
169°
The coast between Worli Point, the NW extremity of Bombay Island, and Malabar Point, about 5.3 miles SSW, is fringed by drying reefs and shoal water, with depths of less than 5.5m extending up to 1 mile offshore in the N part and about 0.5 mile off the S part.
A conspicuous TV ...
1 Mar 12
Jojo 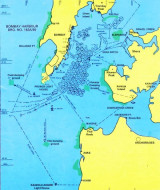 57nm
5°
Between Suvali Point and Daman, is an alluvial belt through which the Tapti River forms a deep and fertile delta.
Along the S part of this coast are small hillocks of drifted sand; the coastin some parts is watered by springs and covered with a thick growth of creepers and date ...
1 Mar 12
Jojo

56nm
169°
Korlai Fort, on the S side of Kundalika River entrance, stands on the summit of a reddish-colored headland, connected to the mainland by a low, narrow, and sandy isthmus. The N part of this headland slopes gradually to the sea and terminates in a rocky point.
A light, with a racon, ...
2 Mar 12
Jojo

75nm
170°
Kumbaru Point, 70m high, lies about 3.5 miles S of Nanwell Point and is the N entrance point of Kumbaru Bay. The point fronts densely wooded hills rising to about 240m; there is a conspicuous bluff about 2.3miles E of the point.
Shah Jehan Shoal, with a least depth of 4.2m, lies ...
2 Mar 12
Jojo