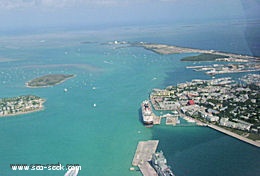 Key West Harbor is 134 miles and 151 miles SW of Miami Harbor via the inside and coastwise routes, respectively.
The harbor proper is in front of the city of
Key West, protected on the E side by the island and on the other sides by Tank and Wisteria Islands, reefs, and sand flats.

Commercial fishing is one of the leading industries, but commerce is mostly in crude and refined oils.
Cruise ships frequently call here, and the harbor is a safe haven for any vessel.

Easy to identify when standing along the keys are three 300-foot-high radio towers and a watertank about
0.3 mile ESE of Fort Taylor, the hotel 0.3 mile S of Key West Bight, the cupola close S of the hotel, and a
110-foot-high abandoned lighthouse 0.5 mile ENE of Fort Taylor.

Main Ship Channel is the only deep-draft approach to Key West.
The channel from the entrance to the upper turning basin is marked by lighted ranges and other aids to navigation.

Pilotage is compulsory for all foreign and U.S. vessels under register in the foreign trade drawing more than 7 feet (including tugs, barges, and tows) bound for or from Key West Harbor, Key West anchorages, and
Key West channels. Pilotage is optional for U.S. mechanically-propelled vessels in the coastwise trade that have on board a pilot properly licensed by the Federal Government.

The operational guidelines in the Port of Key West are flexible due to changing conditions, different stages of current, tide, bottom shoaling, weather and the change in acceptable risk in emergency situations, Key West being a port of emergency entry as well as a cruise ship port of call and a naval station.

The main guideline is a knowledge of seamanship and the port on the part of the pilot and communication of this to the vessel's master for guidance.

Anchoring in the vicinity of Key West Bight Channel Light 2, between KeyWest Bight Channel and the shoreline, is not recommended because of poor holding ground, strong currents, and obstruction of the dock approaches.

Vessels can anchor W of the city in depths of 20 to 26 feet, taking care, however, to avoid the reefs which rise abruptly in some places along the edges of the channels.

A naval explosives anchorage is about 2.5 miles SW of Key West.
A naval operational training area, aerial gunnery range, and bombing and strafing target danger zones are in the Straits of Florida and the Gulf of Mexico in the vicinity of Key West.

Caution: Craft approaching Key West, Boca Chica, and Safe Harbor from the E through Hawk Channel should be mindful that submerged rocks and reefs extend up to 0.6 mile off the keys and give little or no indication of their presence under certain conditions.

It is reported that rain squalls that move through the area during the rainy season can quickly obscure visual ranges and landmarks and make navigation of the narrow channels hazardous.

Tides: The mean range of tide is 1.3 feet at Key West.