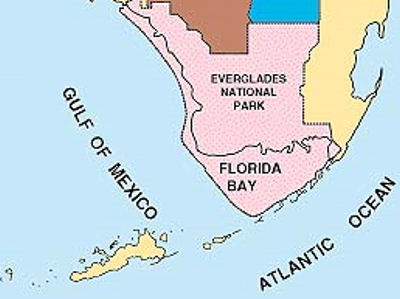 Florida Bay is an estuary covering approximately 1,100 square miles (2,850 square km) between the southern tip of Florida and the Florida Keys,from Barnes Sound to cape Sable. It is located on a shallow shelf lagoon where freshwater from the Everglades mixes with the saltwater from the Gulf of Mexico. Inflow of fresh water into Florida Bay occurs through sheet flow across the southern Everglades. However, water management practices have drastically altered the flow through the construction of canals, resulting in a 50% reduction of freshwater input over the past century.
However, during the rainy season, freshwater enters Florida Bay from rainfall, surface runoff, and groundwater. This results in a salinity gradient across the bay, increasing in salinity from north to south. Portions of the bay often become hypersaline, with salinities reaching over 35 parts per thousand.

Depths are shallow and irregular; the bottom is mostly mud. From April to October the waters of the bay are clear and the shoals plainly discernible, but during the winter the water frequently turns milky and renders the shoals indistinguishable.

Only small craft can navigate this part of the bay which is frequented by small motor yachts, crab and lobster fishermen, and other fishing craft.

In the E part of the bay are small keys and numerous mudflats which bare, or nearly bare, at low water.
The W part of the bay has depths ranging from 7 to 13 feet, and the bottom is covered with loggerhead sponges and turtle grass.

For the protection of wildlife, all keys in the Florida Bay portion of Everglades National Park are closed to landing except those marked as designated camping areas.

The killing, collecting, or molesting of animals, the collecting of plants, and waterskiing are prohibited by Federal Regulation.