The Belgian coast extends for 36 miles between the French frontier and the Netherlands boundary, the latter situated 6 miles W of the mouth of the Westerschelde. The entire area is fronted by an extensive series of shoal banks, both detached and contiguous to the shore.
The shoals lying on the coastal bank are known as Flanders Banks, which in their entirety also encompass the shoals off the French coast between Calais and the Franco-Belgian boundary.
The coast of Belgium is low and formed of sand dunes near the shore. Except for the conspicuous landmarks situated in the vicinity of the harbors and sea resorts, the coast affords few identifiable features.
Nieuwpoort, Oostende, and Zeebrugge are the main ports situated along the Belgian coast. In addition, the port of Brugge is accessible through a canal which is entered within Zeebrugge.
These main ports can be approached through channels, which lie between the various shoals on Flanders Banks, and by a coastal route which leads from Dunkerque. However, the principal approach is through the channel which leads between Flanders Banks and the other off-lying banks.
2012/05/5
Aggiornare
Geof
Condividi i tuoi commenti o le foto su "Belgium - Belgique"

1.5nm
313°
Royal Yacht Club Ostend, the oldest club of Belgium. The city of Oostende with its 9 km of sandy beaches is the biggest and most popular resort of the Belgian coast; The marina is situated at the end of the harbour and has a direct access to the sea and is always accessible whatever ...
5 May 12
Geof 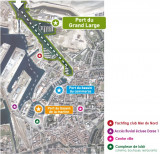