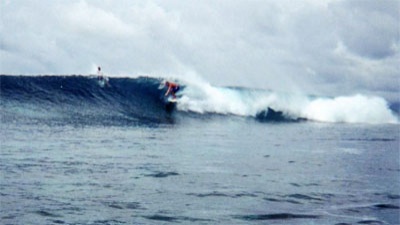 Surf: Thulusdhoo (Cokes), Atoll Capital. Eastern reef of North Male’ Atoll: a short but intense ride.
A big wave tube spot. A steep barreling takeoff, then a very shallow inside section that opens up even more than the takeoff.

Best on mid to high tide, however, can be surfed at low tide if the swell is big enough. Ideal on a straight south swell and winds NW however, can be surfed in winds from any direction W - N. Named after the Coca-Cola factory on the island, beautiful view of palm fringed beach from the surf zone.
Access by boat.

Thulusdhoo has a small quay within a protected harbor area. The lagoon has been deepened and its entrance widened with a jetty built.

Several small warehouses are located near the quay.

6.1nm
12°
Asdu (320 x 150 m), in the lagoon, about 3 miles W of Mirufuri, is covered with coconut palms.
At 32 km N of airport.ASDU is famous for its live house reef jealously guarded and protected by it's management.The natural beauty of this tiny island is in its white sandy beach ...
12 Nov 11
Jojo

0.4nm
75°
This uninhabited island (known as "Chikens" or Kuda Vilingili) E reefof the North Male atoll, is a surf spot that requires speed. It's a Long, excellent left-hander that has two sections, accessible by boat.
Best winds are NW-NNE (offshore).
Named ...
16 Nov 11
Jojo

7.1nm
231°
Himmafushi, inhabited, and Lankanfinolhu (Lankanfushifinolhu), about 1.8 miles SW, lie on the same reef, with a low islet about midway between.
Himmafushi is a fishing village.Lankanfinolhu houses Paradise island resort. On the outer reef, southeast of the island, there are two ...
12 Nov 11
Jojo