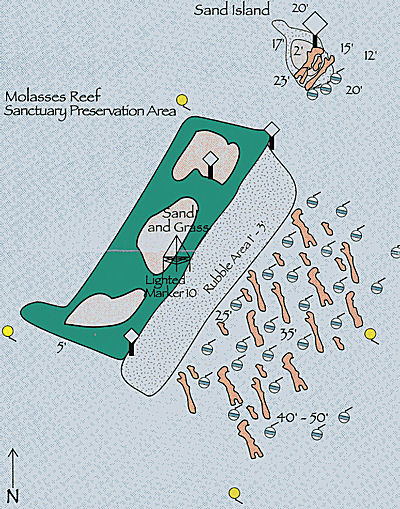 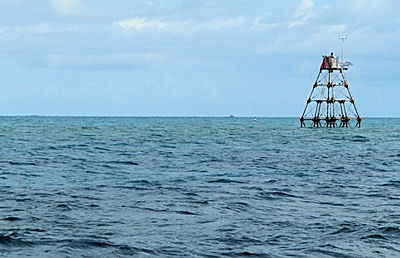 This is arguably the most beautiful collection of reefs in all of
Florida! Rather than a single site, Molasses is an extensive reef complex with diving depths from about 10 feet to more than 70. At depths ranging from 10-40 feet, Molasses Reef features high profile spur and groove coral formations. At 40-60 feet down, seaward sand chutes separate a gently sloping hard flat bottom adorned by hard and soft corals, along with a variety of sponges. The "drop-off" begins in the
50-60 foot range, and extends downward at various angles to the 70-100 foot range. Excellent drift diving can be found here.
Certain areas have distinct features for which they have been named, such as Spanish Anchor Winch Hole, Fire Coral Caves, Hole in the Wall and many others. Snorkelers will enjoy the shallow spur and groove formations typified by Elkhorn and Boulder Corals punctuated by seafans.
Divers will find plenty to occupy them as well. Visibility is generally excellent on this reef as it is "rinsed" by the currents of the nearby gulfstream.
This is probably the most visited site in the Florida Keys and possibly the United States. Because of this, Marine officers generally patrol this area. These officers make sure that divers understand that even touching coral reef can kill these beautiful organisms. This site houses massive brain coral, star coral, and other large barrier corals.
Caves and ledges provide homes for lobsters, crabs, moray eels, parrot fish, angelfish, filefish, turtles, rays, and sometimes nurse sharks.
Divers will be able to come fairly close to these creatures. Sandy patches divide areas of coral and create an amazing sight. An old ship winch and an eight-foot anchor help to create the unique and interesting nature of this dive. Boaters must tie off to one of the 40 mooring buoys surrounding the large tower marking the reef.
This area was harmed when the freighter, Wellwood, ran aground here in
1984. Damaged areas are marked and should be avoided. Part of the remaining rubble from Wellwood is contained in the .3 square nautical mile Sanctuary Preservation Area (SPA) which reaches down to 60-feet.
This is a dive not to miss for anyone traveling to the area. Those looking to snorkel should stay to the northern, shallower end of the reef while divers will want to explore the southern end. This is also an easily accessible and highly used night-dive site.

Local legend suggests that Molasses is named for a barge that grounded here many years ago carrying a cargo of molasses barrels, but much of the strewn wreckage is probably from a wooden hulled Austrian ship named
Slobodna, run aground here in 1887.