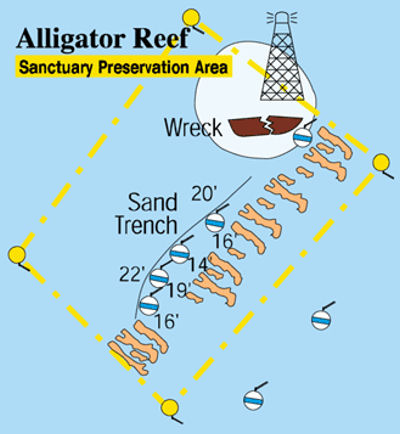 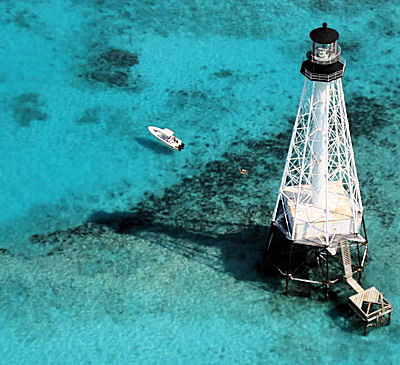 USS Alligator was launched, November 2, 1820, and commissioned in
March 1821. Alligator's short, but intensive, period of naval service was
involved with combating the problem of the slave trade.
In 1821,
Alligator was dispatched to the coast of Africa, where her officers
helped negotiate the purchase of Liberia as an American protectorate. The
new territory was intended to serve as a haven for former American slaves,
where they could start a new life.
Alligator was one of the first
Navy ships dispatched to Florida following the acquisition of
Florida by
the U.S. from Spain in 1821. Alligator was assigned patrol duty to
help suppress the rampant piracy which existed in the Florida
Keys, and
off the coasts of Cuba.
While returning from a naval action against
pirates off the coast of Cuba, Alligator ran aground on
Carysford
(later renamed Alligator) Reef, in the Florida Keys, near present-day
Islamorada, on November 19, 1822. When Alligator's officers and
crew determined that she couldn't be saved, they set fire to her to
prevent her re-capture by pirates. The vessel exploded when fire reached
her munitions' areas. Her officers and crew were rescued and taken off the
Reef.
Alligator may be considered to be the first Navy ship wrecked
in Florida.

The site of USS Alligator is located in the Florida Keys
National Marine Sanctuary (FKNMS) and its location has been generally
known by divers for many years. The site of USS Alligator is
presently being nominated to the National Register of Historic
Places by
the Naval Historical Center. A brief reconnaissance survey project was
completed in October 1995 by several state and federal agencies.
One
longer-term objective is to determine a management strategy for the site.