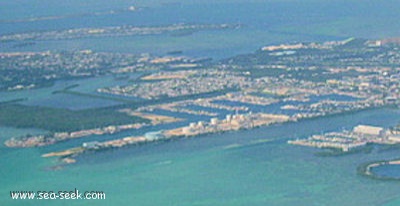 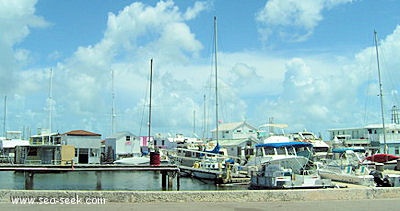 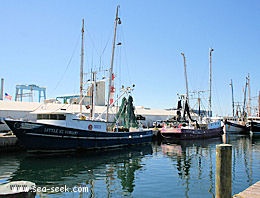 Safe Harbor, 4 miles E of Key West, is a medium- draft harbor on the S side of Stock Island.
Conspicuous objects include the stack and tanks at a powerplant and desalination plant on the E side of the harbor, and a large red dry storage building at a marina on the SE end of Stock Island.
A privately dredged channel leads from Hawk Channel into the harbor.
Piers with dolphins on the E side of the harbor near the entrance are used by barges to unload petroleum products for the power and desalination plants.
Depths: 18 feet.

The piers on the E and W sides of the harbor are used by cold storage and seafood packing plants; numerous shrimp boats tie up alongside the finger piers.

Boatyard on the W side at the head of the harbor.

A privately dredged spur channel E of Safe Harbor leads to a large marina on the SE end of Stock Island. In
April 1982, a reported controlling depth of 18 feet was available to the facility. 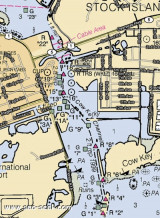