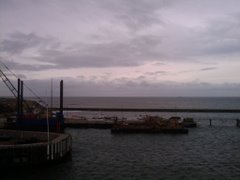 21nm
103°
Gedser Lighthouse
Started in 1802 as a tower with closed coal lighthouse which in 1834 changed to mirror apparatus. Tower increased in 1851 and fitted with fixed lens apparatus. In 1905 the tower was elevated again and the lens unit was exchanged for a rotary, bear glødenetsbrænder ...
15 Dec 09
holger

32nm
335°
Hov LighthouseLangelandOn the east side of Langeland's northern tip, this completely unique little lighthouse but has been and is very important for ship traffic through the Great Belt. It was turned on 15 December 1893. It is listed in Hasle clinker in a so-called monier construction ...
15 Dec 09
holger

42nm
342°
Sprogø LighthouseThe first lighthouse on Sprogø was built by the postal services in 1809 for the demarcartion of the sea route between Sjælland and Fyn. In 1854 it took over lighthouse administration old post lighthouse, which in 1868 was replaced with the current good ...
15 Dec 09
holger