Penang is a state in Malaysia and the name of its constituent island, located on the northwest coast of peninsular Malaysia by the strait of Malacca.
It is bordered by Kedah in the north and east, and Perak in the south.

Penang is the second smallest Malaysian state in area after Perlis, and the eighth most populous. It is composed of two parts - Penang Island, where the seat of government is, and Seberang Perai (formerly, and occasionally Province Wellesley) on the Malay Peninsula.

The island of Pulau Pinang is separated from the mainland by a strait 1.5 to 7 miles wide, which affords sheltered anchorage.
The N part of Pulau Pinang is mountainous, and through the center of the island runs a range of hills, declining in height as it approaches the SW extremity.
Western Hill, the highest point of the island, is 834m high, a short distance to the E is Government Hill. The W side of the island is low and wooded.
The N side of Pulau Pinang is much indented, except near its NE extremity, and is fringed by a shoal area with depths of less than 5.5m extending as far as 2 miles offshore.

Jabatan Laut is in the Wisma Laut [Marine House], with entrances in both Lebuh Light and Lebuh Union. Customs officers, located in Swettenham Pier, issue the Port Clearances. Enter Swettenham Pier via the vehicular gate (not the building) and tell the guard that you need to clear out your yacht with Customs.

If you are coming or going internationally (eg direct to or from Singapore, Thailand or Indonesia), you also need to check in or out with Immigration. The relevant office operates 24 hours a day and is in the old Immigration Building at the corner of Lebuh Pantai and Lebuh Light; enter the building by the door marked ‘Bahagian Perkapalan’ [Shipping Division]. For visa extensions, visit the new Immigration Building across the channel, in Seberang Prai.

When checking in and out, carry ship’s papers, passports, crew lists, and forms including Port Clearances from previous Malaysian ports.

Remember, in Malaysia, you must carry your passport at all times. A photocopy does not satisfy the legal requirements.

Penang is justly famed among cruisers for its medical services, superb food and provisions, developed retail sector, and its multicultural and friendly population. Services catering specifically to cruisers are sparse, but many services are available in the well developed industrial and commercial environment for those who seek them.

Three anchorages and two public marinas are popular with cruisers.

If arriving from the south, you can travel the Western Channel (between Pulau Pinang and Pulau Jerjak) to the Seagate Anchorage or the Marina Batu Uban. Or use the Main Channel (under the Penang Bridge), to reach the Tanjong City Marina or the Junk Anchorage.

Arriving from the north, the Tanjong City Marina, Junk Anchorage, and E-Gate Anchorage are handy. Or you could continue along the Main Channel, under the bridge, and round Pulau Jerjak to the Western Channel and Seagate Anchorage or Marina Batu Uban.

3.7nm
71°
E-Gate anchorage lies , after proceeding south down the Western Channel from the Junk Anchorage.
Anchor offshore from either the E-Gate building (prominent cupola) or the blue-roofed building housing the Jabatan Laut headquarters for the northern region of peninsula Malaysia.
Be ...
27 Nov 11
Jojo

6nm
55°
The Junk Anchorage, just south of the Tanjong City Marina, lies off the clan jetties (the New, Yeoh, Lee, Tan, Chew and Lim jetties).
Diesel fuel is usually available from a fuel barge nearby. The Junk Anchorage is exposed to weather from the north and east.
27 Nov 11
Jojo

7.5nm
57°
Pinang Harbor is one of Malaysia’s largest ports and handles most of the trade for the cultural, industrial, and agricultural regions of Northern Peninsular Malaysia.
The port complex includes facilities on Pulau Pinang at Georgetown and on the mainland at Butterworth and Perai ...
20 Dec 11
Jojo

14nm
21°
The Sungai Muda is located about 6 miles S of the Sungai Merbok entrance. It is obstructed by a sandy bar which dries from 0.6 to 1.2m at LW.
Small craft, drawing 1m, can enter at half tide and proceed about 4 miles upstream.
20 Dec 11
Jojo 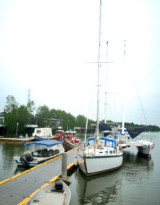 20nm
16°
The Sungai Merbok (Merbau River), the entrance to which is formed between the low coast on the N and the hills to the S, is fronted by the coast mud flat, which has depths under 5.5m, and extends nearly 3 miles to seaward.
There is a depth of 2m on the bar, with depths of 5m within. ...
20 Dec 11
Jojo