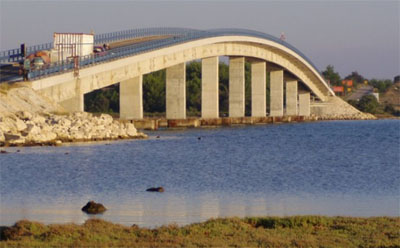 The island of Vir is one of the 300 islands of Zadar archipelago.
Vir island is located SW Pag, it is 25 kilometers north of Zadar and it has an area of 22.38 square kilometers. It rises gently from the sea to a bare and double summit, (Bandira) 112m high, with reminds of fort.

A bridge, that was built in 1976 and that has a vertical clearance of 9 m, spans the channel of Privlaki Gaz, and connects Otok Vir to the mainland. The bridge  It is very shallow (about 1 m). It is 27m wide and is marked by beacons.

The biggest village Vir is situated on the hill above the sand bay Sapavac.
Vir Island is also commonly known as the ‘island of contrasts’ because of the number of resort houses, and tourists staying here.

Vir Island has sandy and pebbly beaches with numerous bays and inlets with piers.

There is also a small islet nearby called Skoljic that is covered in pine forests and has a long sandy beach.