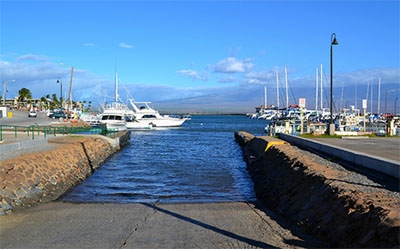 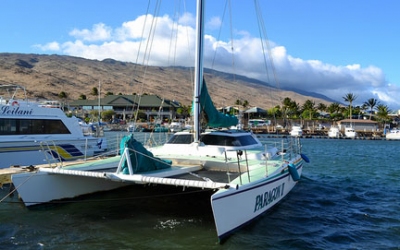 2.4nm
107°
A little rolly and tricky to land at beach.
Good holding ground - big Sand patch for many boats.
Don't anchor where coral are. Stay away if: You want the boat don't move at all You can't handle shorebreak Don't like people paddle around your boat.
11 Dec 15
Joëlle

6.7nm
18°
Kahului Harbor is located near the Kahului Airport and Kahului which is the islands largest town and has lots of shopping and restaurants nearby.Kahului Harbor is primarily a commercial harbor and port for Hawaii's many cruiseships such as Carnival and Norwegian Cruise Lines.
Phone: ...
12 Dec 15
Joëlle

9.5nm
175°
Molokini is a tiny crescent-shaped island about three miles east of Makena.Molokini Crater is what’s left from an eruption that is said to have occurred around 230,000 years ago. The cinder cone created has since been eroded to a crescent atoll.
Since it’s violent volcanic ...
12 Dec 15
Joëlle

11nm
300°
There is a marina here but you can forget it. It is always super packed and all but impossible to get a “slip”. Just go past the marina and harbor entrance and find an open mooring buoy with LYC painted on it. In 2010, these buoys were white and there were 7 of them. Most of them ...
11 Dec 15
Joëlle

12nm
156°
La perouse bay is located south of the town of Wailea. It was named for the french Captain Jean-François de Galaup, comte de La Pérouse, in 1786.  La Pérouse surveyed and mapped the prominent embayment near the southern cape of Maui opposite the island of Kahoʻolawe. The ...
12 Dec 15
Joëlle

15nm
331°
Wonderfull anchorage, great snorkeling.
Get there early before the tour catamarans arrive and be careful not to anchor on the coral; big fines if you damage.
The bay has two bights. You can only anchor in the eastern.
This is a great snorkeling spot ( by mid-morning you will ...
11 Dec 15
Joëlle