Costa Rica, officially the "Republic of Costa Rica", is a country in Central America, bordered by Nicaragua to the north, Panama to the southeast, the Pacific Ocean to the west, the Caribbean Sea to the east, and Ecuador to the south of Cocos Island.

The beautiful Isla del Coco, situated 532 km from the Costa Rican coast in the Pacific Ocean, is a National Park and sought-after diving paradise. A permit is required to visit which must be applied for after arriving in Costa Rica.

Costa Rica now employs a force know as the Policia Turistica who keep a serious eye out that tourists are well protected and assisted as petty theft is very common here. As with all South America countries, keep your valuables under lock and key and padlock or secure down below any valuable loose items on deck. Cruisers who have visited recommend not leaving your boat unattended at night.

Take maximum precautions. Lock your outboard and dinghy at all times with a big chain so thieves cannot just cut the cables and pry things off with crowbars.

The Pacific coast of Costa Rica is drier, while the Atlantic coast has heavy rainfall. Both coasts are hot and humid. December to April are the dry months, while May to November are wet, hot and humid. The east coast is under the influence of the NE trade winds during the winter months, but the west coast has light winds and often calms. Costa Rica is rarely affected by tropical storms. 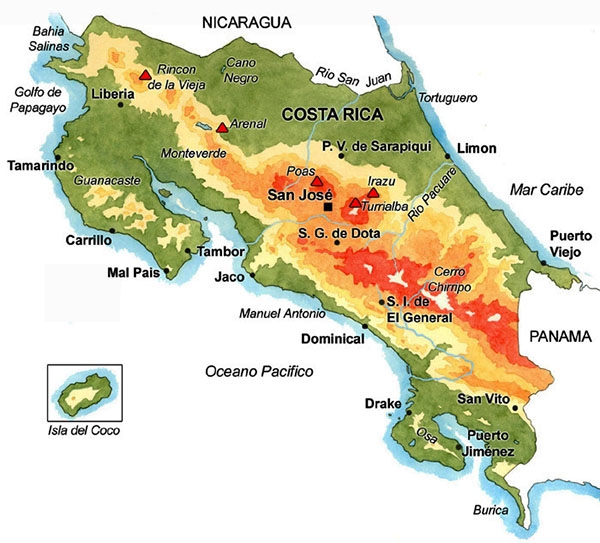 171nm
10°
Coco Beach (Playa del Coco) is well known for its popularity with Costa Rica's youth. It is a small beach town in Guanacaste province, on the North Pacific Coast of Costa Rica.The bay provides some protection from the Papagayos, but the winds still can overwhelm the area.
19 Dec 15
Joëlle

177nm
10°
The northernmost point of entry to Costa Rica is situated on Guanacaste's Gold Coast. The International airport is less than an hour's drive from the marina. Situated below the hurricane belt and sheltered from the easterly trade winds of Papagayo, this marina should offer a safe ...
19 Dec 15
Joëlle

146nm
38°
This marina is part of the Los Suenos Resort and is a good place to use a base for exploring the rest of the country.
A range of services are available, with further plans to include repair facilities, chandlery, shops, and clearance facilities. Services include cable TV, telephone, ...
18 Dec 15
Joëlle

158nm
32°
Puntarenas lies along a peninsula 5 miles long but only 600 metres at its widest point, narrowing to less than a 100 metres at some points.
Located in the calm waters of Puntarenas Estuary the Yacht Club offers natural protection fro the ships.This is primarily a fishing port, ...
19 Dec 15
Joëlle

157nm
50°
This popular town lies in the centre of Costa Rica's Pacific coast. It is an attractive resort with excellent beaches.Quepos harbor is a fishing port and a port of entry. Clearance is available at the Marina Pez Vela but the officials are not based at the port and have to travel ...
19 Dec 15
Joëlle