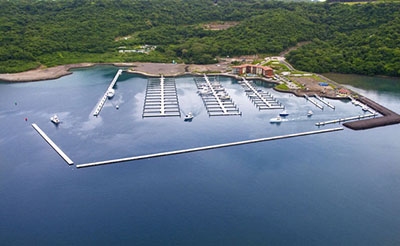 The northernmost point of entry to Costa Rica is situated on Guanacaste's Gold Coast. The International airport is less than an hour's drive from the marina. Situated below the hurricane belt and sheltered from the easterly trade winds of Papagayo, this marina should offer a safe haven (albeit a five star one!)

The marina has 350 wet slips for yachts ranging in size from 35’ to 240’ in length. Reports are that the marina is very exposed to the trade winds which can make berthing tricky. Chafe gear and sturdy spring lines are recommended to minimise the effects of the surge.

The harbourmaster is reported to be very friendly and helpful, as are the staff.

5.8nm
209°
Coco Beach (Playa del Coco) is well known for its popularity with Costa Rica's youth. It is a small beach town in Guanacaste province, on the North Pacific Coast of Costa Rica.The bay provides some protection from the Papagayos, but the winds still can overwhelm the area.
19 Dec 15
Joëlle

64nm
127°
Puntarenas lies along a peninsula 5 miles long but only 600 metres at its widest point, narrowing to less than a 100 metres at some points.
Located in the calm waters of Puntarenas Estuary the Yacht Club offers natural protection fro the ships.This is primarily a fishing port, ...
19 Dec 15
Joëlle

83nm
135°
This marina is part of the Los Suenos Resort and is a good place to use a base for exploring the rest of the country.
A range of services are available, with further plans to include repair facilities, chandlery, shops, and clearance facilities. Services include cable TV, telephone, ...
18 Dec 15
Joëlle

114nm
129°
This popular town lies in the centre of Costa Rica's Pacific coast. It is an attractive resort with excellent beaches.Quepos harbor is a fishing port and a port of entry. Clearance is available at the Marina Pez Vela but the officials are not based at the port and have to travel ...
19 Dec 15
Joëlle

160nm
104°
Puerto Limon has a privileged location in the Caribbean coast, due to its proximity to the Panama Canal, Gulf of Mexico, and southern United States.Puerto Limón, on the Caribbean side, is the main port of Costa Rica. During 2011 a number of ships were robbed at gunpoint in the harbour, ...
20 Dec 15
Joëlle