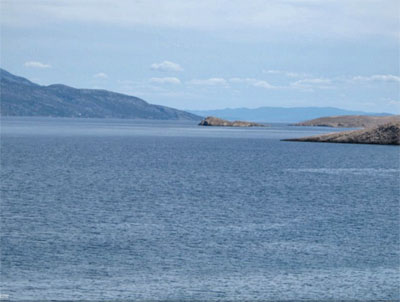 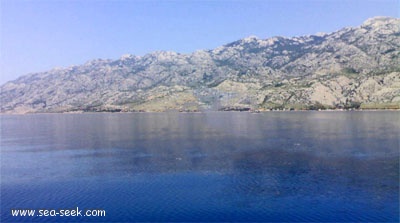 Velebitski channel is the area of sea that separates at N, the island of Rab of Croatia mainland and then runsalong  Island Pag to Cape Baljenica S.
Bad reputation as the Bora, very strong and unpredictable, is particularly dangerous as there is no safe place to go.
The reputation of Velebitski kanal comes largely from winter storms, during which the force Bora regularly reaches 12. These conditions do not appear in the summer, but the Bora can still occur without warning and with force gusts.
The Sirocco can also blow very hard on this channel.

Vir, Pag and Rab islands, border the Velebitska Kanal. Between these islands, the winds can be almost as strong as in the channel itself. The shores of these islands, exposed to NE, are rocky, with no vegetation.
The strength and turbulence of the Bora decrease gradually as one moves away from Velebitska kanal.

The E channel, is long and narrow and lies close W of the mainland. It is separated from Kvarneric to the W by several large islands. This channelleads through Vinodolski Kanal and Tihi Kanal at its N end and enters the NE head of the basin.
There are numerous anchorages for small craft along both shores of the N part of this channel. However, as there is little shelter for large vessels, this part of the channel is generally avoided during the late autumn and winter. At such times, large vessels proceed to Rijecki Zaliv via Srednja Vrata or Kvarner.

Otok Goli, bare and precipitous in its NE part, lies on the W side of Velebitski Kanal 9 miles NNW of Jablanac. This island is generally steep-to except at its SE extremity where a rocky reef extends up to about 0.5 mile SE. Rt Sajalo, the NW extremity of the island, is marked by a lightand fringed by rocks.

Otok Sveti Grgur, 225m high, lies 1 mile NW of Otok Goli. This island is also mostly steep-to and bare, with some bushes on its S side. Rapski Kanal is deep and leads between Otok Sveti Grgur and Otok Rab. This channel is seldom used as the fairway is only 0.3 mile wide in places and several rocky patches lie adjacent to its S side.

Otok Privic, 357m high, is hilly, barren, and steep-to. Rt Strazica, the NW extremity of the island,is marked by a light. It is reported that a prominent tree stands 0.4 mile SSE of this point.Senjska Vrata, the passage leading between the S end of Otok Krk and Otok Privic, is 0.4 mile wide at its narrowest part and is generally deep. This channel is primarily used by vessels proceeding from the SW part of Kvarneric to the N reaches of Velebitski Kanal.

The central part of Velebitski Kanal trends NW from the E entrance of Ljubacka Vrata and leads between the mainland and the E side of Otok Pag. The N shore of the channel is high and steep but the S shore is lower and gently sloping. The fairway is deep and clear and easily navigated, but is exposed to the full force of frequent NW winds.

The S part of Velebitski Kanal trends SE for 12 miles from the E entrance of Ljubacka Vrata to the entrance of Novsko Zdrilo (Maslenicki Kanal). The NE shore of the channel is high and precipitous and contrasts considerably with the SW side which is backed by low and sloping hills.

Otocici Razanci, consisting of three small and low islets, lies on a shoalbank in the middle of the channel 3 miles ESE of the E entrance of Ljubacka Vrata. These islets are not easily seen in periods of reduced visibility. A light is shown from a structure, 6m high, standing on the SE end of Razanac Veli, the SE and largest islet.
A conspicuous statue stands on the summit of this islet. The passage lying on the N side of these islets is preferred, but no attempt should be made to pass between them. The channel narrows 5 miles SE of Otocic Razanci and the fairway is bordered by coastal banks and reefs.

18nm
308°
These three islands are N of the island of Rab.Otok Goli, bare and precipitous in its NE part, lies on the W side of Velebitski Kanal 9 miles NNW of Jablanac.
This island is generally steep-to except at its SE extremity where a rocky reef extends up to about 0.5 mile SE.
Rt ...
4 Aug 11
Jojo

21nm
182°
Kanal Nove Povljane, entered between Otok Vir and the SE end of Otok Pag, leads 5 miles SE into Ninski Zaliv.
Shoals at the inner end of this channel restrict the fairway to a width of about 250m, with a controlling depth of 8m. Vessels with a draft of over 6m are advised not to ...
23 Jul 11
Jojo

23nm
219°
Otok Olib is located E of O. Silba. It belongs to Zadar archipelago.The island has been inhabited since Roman times. The residents bought their island in 1900. The only village on the island was established around the port.
To the east of the island you will find some small hidden ...
27 Jul 11
Jojo

31nm
189°
Rivanjski Kanal continues NW from the N end of Srednji Kanal and leads between Otok Rivanj andOtok Sestrunj.
It is generally used by vessels proceeding between Srednji and Zadarski Kanals.
Otocic Tri Sestrice, a group of islets and rocks, extend up to 2 miles NW of Rt Zanavin, ...
9 Sep 11
Jojo

24nm
223°
Olipski Kanal leads NNW between the E side of Otok Silba and the W side of Otok Olib and merges into the N end of Pohlipski Kanal.
This channel is deep and has a minimum navigable width of 0.7 mile. It is often used by vessels proceeding to and from Zadar.
Good anchorage is ...
18 Sep 11
Jojo