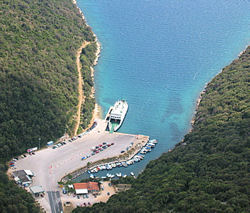 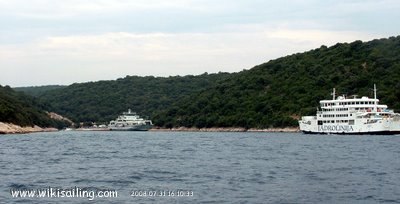 Located in the NW Fire Rt Sv Mikula, this deep bay has a dock to receive the ferry that connects the island to Merag on the island of Cres.
NW in the dock allows the reception of small units.
Access is not recommended for boaters because of the presence of Ferries.
2011/08/2
Update
Jojo

4nm
158°
Otok Plavnik lies with Rt Veli Pin, its N extremity, located 0.7 mile E of the E side of Otok Cres and divides Srednja Vrata in its S part into two channels.
This cliffy island is 194m high and partly wooded.
Several small islets lie on a shoal bank which extends about 1.5 miles ...
4 Aug 11
Jojo

12nm
304°
Kanal Vela Vrata connects the N end of Kvarner to Rijecki Zaliv and leads between the N end of Otok Cres, on the E side, and the mainland coast, on the W side.
The channel is deep and clear, the bottom being formed of mud.
31 Jul 11
Jojo

3.9nm
162°
Kanal Krusija leads to the W of Otok Plavnik.
This channel is frequented because of its steep-to shores and deep passage.
A strong current may occasionally be experienced in this channel, depending on local weather conditions, but this passage is recommended over the one leading ...
4 Aug 11
Jojo

18nm
263°
The large natural inlet Zaljev Rasa offers the best protection of all sectors of the entire E coast of Istria, while the Bora blows strongly here. This bay is sinking into the earth near 6M, between Rt Ubac and Rt Mulac. The Rijeka Rasa flows into the bottom, creating a current that ...
5 Sep 11
Jojo

0.3nm
283°
Double cove, like its neighbor Uvala Mali Bok, traveled by a power line that can provide electricity to neighboring island of Cres.
This line allowed in part the mooring.
2 Aug 11
Jojo

16nm
132°
Rapski Kanal is deep and leads between Otok Sveti Grgur and Otok Rab.
This channel is seldom used as the fairway is only 0.3 mile wide in places and several rocky patches lie adjacent to its S side.
4 Aug 11
Jojo