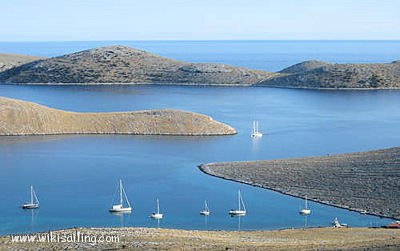 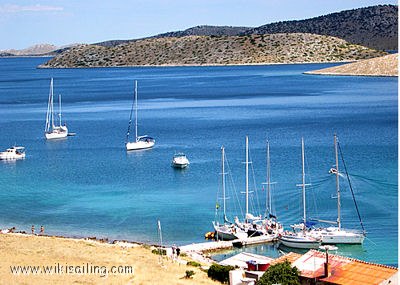 12nm
87°
The island of Murter is the largest island of the Sibenik archipelago. It is close to the coast on which it is connected by a bridge, low air draft at Tijesno (Tisno) on the continent. During the summer the bridge opens to allow passage of boats.
The NW part of the island is fertile ...
3 Apr 11
Jojo

16nm
119°
Otok Zirje is the farthest and the largest island in the Sibenik archipelago.
It is long of 6,5 NM (NW/SE) and 1,4 NM wide.
The main village, Zirje, is located in the middle of the island. A small port, luka Muna, on the coast N of Zirje, home to the ferry that connects the ...
16 Aug 11
Croatia

9.2nm
64°
Vrgadski Kanal, 7 miles long, leads between Otok Murter and Otok Vrgada and is the principal channel used in the S approach to Pasmanski Kanal and Zadar.
Vessels with a maximum draft of 6.4m may pass through Pasmanski Kanal. Vessels with drafts over 6.4m must either proceed through ...
16 Jul 11
Jojo

26nm
19°
Novigradsko More, a landlocked bay, lies at the S end of Novsko Zdrilo and provides good anchorage.
Rijeka Zrmanja flows into the bay at the E side. This river is navigable by small craft as far as the village of Obrovca, 6 miles above the mouth.
Luka Novigrad, a narrow inlet, ...
23 Jul 11
Jojo

33nm
342°
Kanal Nove Povljane, entered between Otok Vir and the SE end of Otok Pag, leads 5 miles SE into Ninski Zaliv.
Shoals at the inner end of this channel restrict the fairway to a width of about 250m, with a controlling depth of 8m. Vessels with a draft of over 6m are advised not to ...
23 Jul 11
Jojo