Tg Balimbing (Belimbing) is the S point of Teluk Balimbing and the NW entrance point of Selat Sunda.
The coast is generally low and densely overgrown, but inland the country is mountainous.

Teluk Balimbing indents the coast just N of Tanjung Balimbingpamancasa. The village of Balimbing is situated close E of the SW entrance point of Teluk Balimbing.
To the N of this same point the 10m curve is about 0.5 mile offshore and the depths shoal quickly to 5.4m. The depths in the bay shoal gradually. 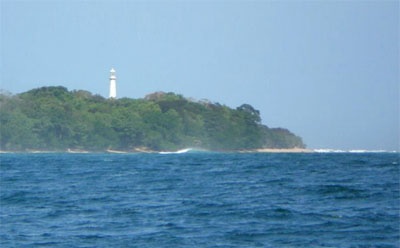 6.7nm
282°
Pulau Batu Kecil lies about 7 miles WNW of Tanjung Balimbingpamancasa; it is low, wooded,about 0.7 mile in extent, and surrounded by a reef.
A shoal bank extends NW and SE of the island.
7 Feb 12
Jojo

63nm
318°
Pulau Pisang, quartz rock, 41m high and densely overgrown with coconut palms, is almost 1 mile in extent and lies about 11 miles SE of Teluk Pugung and I mile offshore; the intermediate coast is steep-to.
It is surrounded by a narrow coastal reef with deep water about 0.2 mile ...
7 Feb 12
Jojo

132nm
282°
Pulau Dua is inhabited and covered with trees; except for a small opening on the W side, it is surrounded by a coral reef of considerable extent, partly dry at LW, but having depths of 7.3 to 18.3m close-to.
7 Feb 12
Jojo