Otocic Lunga is located at SW of O. Kornat, it is 81 m higher. It is separated of O. Ravni Zakan (S from it) by a narrow chanel of 5,9 m depth in its center.

S O. Lunga there is a bay where it is possible to anchor by 12 m.

Sheltered from the W to E by the N. 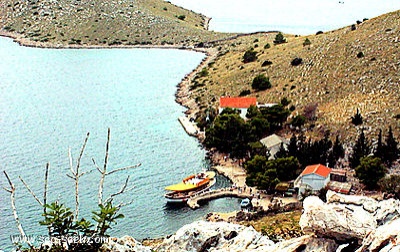 12nm
112°
Otok Zirje is the farthest and the largest island in the Sibenik archipelago.
It is long of 6,5 NM (NW/SE) and 1,4 NM wide.
The main village, Zirje, is located in the middle of the island. A small port, luka Muna, on the coast N of Zirje, home to the ferry that connects the ...
16 Aug 11
Croatia

9.5nm
64°
The island of Murter is the largest island of the Sibenik archipelago. It is close to the coast on which it is connected by a bridge, low air draft at Tijesno (Tisno) on the continent. During the summer the bridge opens to allow passage of boats.
The NW part of the island is fertile ...
3 Apr 11
Jojo

8.9nm
33°
Vrgadski Kanal, 7 miles long, leads between Otok Murter and Otok Vrgada and is the principal channel used in the S approach to Pasmanski Kanal and Zadar.
Vessels with a maximum draft of 6.4m may pass through Pasmanski Kanal. Vessels with drafts over 6.4m must either proceed through ...
16 Jul 11
Jojo

28nm
10°
Novigradsko More, a landlocked bay, lies at the S end of Novsko Zdrilo and provides good anchorage.
Rijeka Zrmanja flows into the bay at the E side. This river is navigable by small craft as far as the village of Obrovca, 6 miles above the mouth.
Luka Novigrad, a narrow inlet, ...
23 Jul 11
Jojo

12nm
99°
Kaprije is located in the central part of the Sibenik archipelago between the islands Zmajan and Kakan.
The highlight of the island is Vela Glavica (132 m).
The only village of the island is Kaprije, S. The port is busy.
Automobiles are not allowed on the island.
16 Aug 11
Croatia