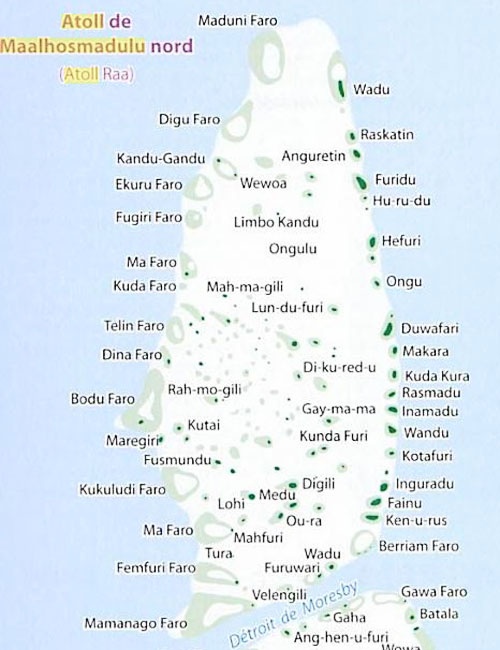 Malosmadulu Atoll (65 km long and 28 km wide) consists of 90 islands of which only 16 are inhabited.The Maldives has 12 500 principal economic activity for fishing. Capital Ugoofaaru a fishing fleet the largest in thecountry.Rasgetheemu Island occupies a special place in popular legend, because this is a princess and her lover took refuge when they had to flee almost 1000 years ago the current Sri Lanka.

The atoll is full of deserted islands, but the only island open to tourists is Pearl Island.

The E side of North Malosmadulu Atoll consists of about 20 islands and islets separated by good passages leading into the lagoon.

Navigation in the central part of the atoll is impracticable due to the numerous coral heads.

12nm
4°
Maduni Faro, a lagoon reef, lies at the N of the atoll. Vaadhoo lies about 3 NM ESE of Maduni Faro, at the S end of a large lagoon reef.A wide opening into the lagoon lies between Maduni Faro and Wadu; it is free of known dangers in the middle of the fairway, with depths ...
6 Nov 11
Jojo

40nm
125°
There is a wide opening into the atoll between Aligau and Lowalfuri, about 3.5 miles NNW; the islet of Madewaru lies near the middle of the opening.
5 Nov 11
Joëlle

30nm
111°
BetweenMavaidu and Hurawali, about 4.5 miles NE, several islets and detached reefs lie some distance SE of the enclosing reef. There are several channels into the lagoon between islets in this section of the atoll.
5 Nov 11
Joëlle

28nm
118°
From Kanifuri (Kanifushi), the barrier reef extends about 7 miles NNE to Fallwaru (Madivaru).The islet of Naifaru, the most densely populated of the atoll lies on the reef about 2 miles SSW of Fallwaru. It is the capital of Lhaviyani (Fadiffolu) atoll. The total ...
5 Nov 11
Joëlle

17nm
1°
The Powell Islands consists of two islands on a detached reef of their own with very deep waters. Etingili is the NW island and Alifuri is the SE island. Alifuri is inhabited.It is reputedly the home of finest dhini builders in the country. The government-owned Alifushi ...
7 Nov 11
Jojo