Commercial port allowing Slovenia to have access to the Adriatic Sea in the Gulf of Trieste. It is the only commercial port in Slovenia.
2011/08/26
Update
Jojo 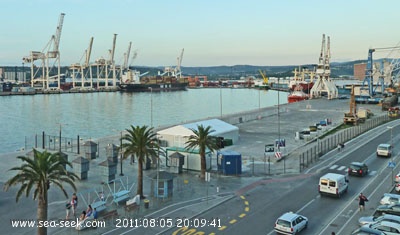 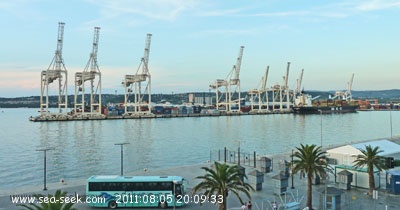 2.1nm
282°
Koperski Zaliv (Baia di Capodistria) is entered between Rt Ronco and Rt Debeli, 5 miles NE.The NE and SW shores of the bay are hilly, but the shore at the head of the bay, through which the Fiume Risano flows, is low. Monte Sermino, surrounded by salt beds, rises isolated in the river ...
28 Aug 11
Jojo

7.8nm
243°
The Gulf of Piran or Piran Bay (Slovene: Piranski zaliv, Croatian: Piranski zaljev or Savudrijska vala, Italian: Baia di Pirano) is located in the northern part of the Adriatic Sea, and is a part of the Gulf of Trieste. It is between Rt Madona at N and Rt Saudrija.
It was named ...
28 Aug 11
Jojo

25nm
185°
Limski Kana is entered between Rt Kriz, located 2.4 miles NW of Rovinj, and Rt Sjole, 1 mile NNW.
The Lim bay and valley is a peculiar geographic feature found near Rovinj and Vrsar on the western coast of Istria, south of Porec, Croatia.The Lim valley is the 35 km long valley ...
31 Aug 11
Jojo

0.5nm
227°
Port S of Marina Koper, W of the old city is the commercial port of trade Slovenian closest to Italy.Dangers: shoal along the shore on either side of Koper, stand therefore at least 0.3 M from the shore.Access: Several lateral buoys with lights signal the deep water channel of the ...
21 Mar 11
Joëlle