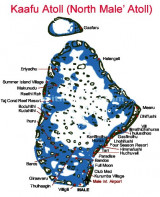 4.3nm
130°
Elongated, with an area of ​​10 hectares, Kanifinolhu located E Reef North Male Atoll, is surrounded by a large lagoon that is home to an island of fishermen.
16 Nov 11
Jojo