The Irrawaddy River or Ayeyarwady River is a river that flows from north to south through Burma (Myanmar). It is the country's largest river and most important commercial waterway.
Originating from the confluence of the N'mai and Mali rivers, it flows relatively straight North-South before emptying through the Irrawaddy Delta into the Andaman Sea. Its drainage area of about 255,081 km² covers a large part of Burma.
After Rudyard Kipling's poem, it is sometimes referred to as 'The Road to Mandalay'.

The Irrawaddy River rises in the N part of Burma and generally flows to the S. Augmented by numerous tributaries, the Irrawaddy River flows into the Bay of Bengal by way of several channels through an extensive delta lying approximately between the meridians of 94°15'E and 96°50'E. This delta is being constantly extended seaward by the deposit of silt.
Many low islands are formed near its seaward extremity by tidal backwaters and smaller cross channels which connect with the main channels.
The only channels through the Irrawaddy Delta used by ocean-going vessels are the Bassein River and the Rangoon River, the furthest W and E, respectively. 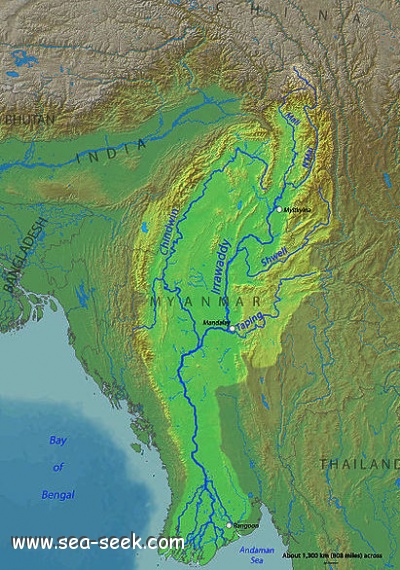 71nm
258°
Cape Negrais, the seaward extremity of a spur of the Arakan Yoma range, in the Bay of Bengal, is fronted by conspicuous cliffs which rise about 0.8 mile inland to a high summit. The cape has been reported to be a good radar target up to 24 miles.
The coast between Cape Negrais ...
21 Nov 11
Jojo

352nm
131°
Racer Marina is the only fully equipped Marina on the east coast of the Gulf of Thailand. Maintenance service, wet berths, hardstand berths. We also have a 35 tons marine travel lift. Visit our website for more information. www.racer-marina.com
18 Jun 17