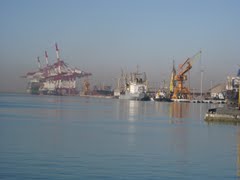 83nm
189°
Al Jazira port fronts Jazirat al Hamra, which was once an island but is now part of the mainland.
The port exports rock and aggregates from nearby quarries but can also handle bulk, liquid, ro-ro, container, and general cargo.Tides—Currents.—The mean maximum ...
10 Oct 11
Joëlle

105nm
171°
Khor Fakkan (or Khawr Fakkan) is a town located along the Gulf of Oman on the east coast of the United Arab Emirates (UAE). The town is set on the picturesque bay of Khor Fakkan, which means "Creek of Two Jaws".
Khor Fakkan belongs to the emirate of Sharjah but is geographically ...
14 Oct 11