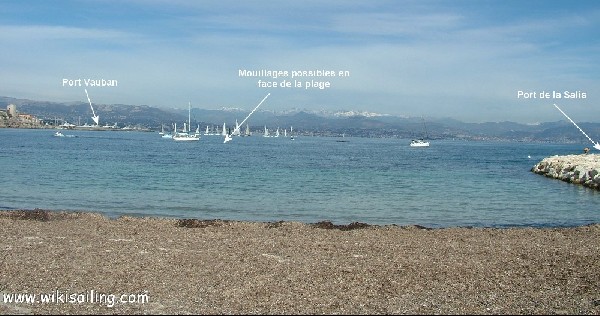 6nm
240°
Cannes bay is located between Pointe de l'Aiguille and Cap de la Croisette, 4 miles ENE, from which the islands "Les Îles de Lerins"  extends up to 2 miles. The E side of the gulf is occupied by the town and port of Cannes well known by it's film festival, where the houses form ...
4 Jul 12
Atx

2.3nm
233°
Golfe Juan is entered between Cap de la Croisette and Point de l'Ilette, 3.8 miles ENE. This gulf is sheltered from the SW by Iles de Lerins and from the S by shoals and is one of the best roadsteads along this part of the coast. In the approaches to the gulf, the currents are weak ...
17 Jul 11
Atoi

0.7nm
176°
The highest point of the Cap d’Antibes peninsula. It dominates the E shore of  gulf Juan. A light is shown from a square white tower with a red lantern, 24m high, standing on this point.
A signal station and a prominent chapel are situated close NE and close SW, respectively, ...
28 Mar 12

0.8nm
359°
Antibes (Port Vauban) is an ancient town standing on a promontory which separates the harbor from the small bay to the S. The harbor has extensive facilities for pleasure craft, yachts, and fishing boats.
Vessels can anchor E or NE of the harbor entrance, but the bottom of fine ...
28 Mar 12