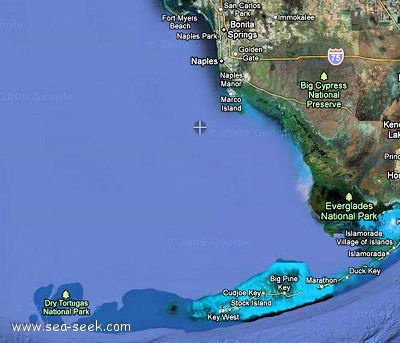 The coast, for nearly 115 miles, from Key West to San Carlos Bay is low, sandy, and generally wooded. Innumerable small islands and keys, interlaced by many small rivers and bayous, make up Everglades National Park and the Ten Thousand Islands. From San Carlos Bay N to Tampa Bay the coast is made up of nearly straight sandy beaches of the barrier islands.

The SW extremity of the Florida mainland is part of the Everglades National Park and Big Cypress Swamp. Much of these areas are under water throughout the year and are nearly all covered during the rainy summer season. Fronting the swampy areas are the Ten Thousand Islands, a group of low mangrove-covered islands divided by tidal channels. N of the Ten Thousand Islands the coast is low, sandy, and generally backed by pine forests.

From Cape Romano to Anclote Keys the coast becomes a barrier beach of low islands separated by inlets, most of which are small and cannot be distinguished from offshore.

Between Anclote Keys and St. James Island, the W side of Apalachee Bay, the coast is low and marshy for 1 to 2 miles inland then backed by pine forests. The shoreline is broken by a number of unimportant rivers and creeks.

The Florida Keys comprise a chain of low islands along the SW coast of the Florida Peninsula extending
Win a wide arc to the Dry Tortugas. The keys are mostly of coral formation and are generally covered with dense mangrove, though some have stands of pine and a few have coconut groves. Florida Keys National Marine Sanctuary, a Marine Protected Area (MPA), surrounds the keys from Biscayne Bay to Dry Tortugas.

On the straits side of the keys, and at an average distance of 5 miles, are the Florida Reefs, a dangerous line of shoals which extend along the entire length of the chain. The reefs are particularly hazardous because they do not break in smooth weather and few of them are exposed. The water shoals abruptly between the reefs and along their outer edges.

When approaching the reefs from seaward, their proximity usually is indicated by a change in color of the water from deep blue to light green or by the bank blink, described in chapter 3. However, too much reliance should not be placed on such indications. Lights and daybeacons facilitate navigation along the reefs in clear weather, but soundings should be resorted to in thick weather. Depths of 50 fathoms indicate a distance of 2 to 3 miles from the reefs, and great caution should be used in approaching closer. Fogs are infrequent in this area.

The water always becomes milky following windy weather. The usual color is bluish green on the reefs, while the rock patches are dark, shading through brown to yellow as they approach the surface. Sand patches are bright green. Grass patches at depths of 10 to 15 feet have the appearance of rocks. With the sun astern, the line marking deep water and the edges of reefs is surprisingly clear from a position aloft.

The Florida Keys Particularly Sensitive Sea Area (PSSA) is an IMO-designated zone that encircles the sea area around all of the Florida Keys. The PSSA includes the entire Florida Keys National Marine
Sanctuary as well as Biscayne National Park at the northeastern end of the keys. The PSSA has been established to protect the exceptional values of the sea area around the Florida Keys from possible damage by international shipping activities. The PSSA includes the Tortugas Ecological Reserve, which was established in 2001 to protect nearly pristine coral formations and habitat in the Sanctuary. The coral resources within the Reserve are especially vulnerable to possible damage from shipping activities.

Domestic law and regulations adopted by the United States for the Sanctuary apply within the PSSA.
Several of these concern shipping activities:

Additional restrictions on vessel activities, such as vessel discharges, apply within the Sanctuary.

Along the coast from Key West to Tampa Bay, the major weather hazards include tropical cyclones, thunderstorms, and cold fronts. Tropical cyclones, which can occur in any month, are mainly a threat in June, August, September, and October. Seventeen tropical cyclones have approached the coastline between Key West and Tampa Bay since 1950. The chance of a tropical cyclone encounter decreases along theWcoast, N to Fort Myers and Tampa Bay. Thunderstorms develop on about 60 to 80 days annually along this section of the coast. They are least likely near Key West and most likely in the Tampa Bay area. While they can occur at anytime, they are most likely from June through September, during the late afternoon and evening hours; at sea they frequently occur at night. During the summer months, thunderstorms are observed on about 10 to 20 days per month. From fall through spring, cold fronts occasionally reach these waters generating strong, gusty winds which kick up rough seas. While gales are infrequent, winds of 28 knots or more occur during passage of the front.  High winds from the NW precede the front then turn to the North and finally Northeast as the front passes.   During the winter, there fronts can occur every week and create problems for boaters that get caught in the Gulf of Mexico as there are few harbors (Tampa Bay, Charlotte Harbor and Ft Myers) that offer protection for transiting boaters.  Wave heights of 6 to 10 feet or more are encountered during the passing of a cold front as far south as Cape Romano. Visibilities are usually good, particularly off Key West. Farther N, they drop below 2 miles about 1 percent of the time from December through April. Along the coast, a shallow ground fog may form, but this usually dissipates with the rising sun. 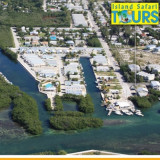