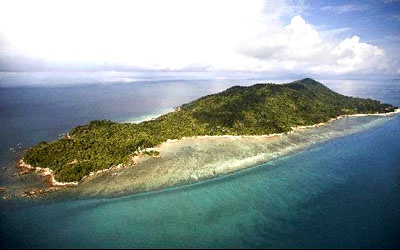 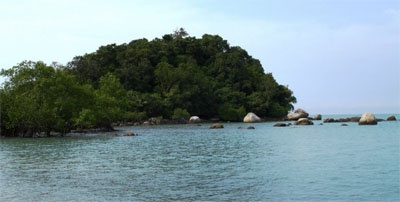 Between Melaka and Tanjong Seginting, about 46 miles SE, the low, thickly wooded coast is bordered by a mud bank which extends up to 2.5 miles offshore in places.

The Water Islands, centered about 8 miles SE of Melaka, consists of a group of six tree-covered islands of moderate height.
Pulau Besar, the largest island, is 40m high and is separated from the coast to the N by a foul, rocky channel.

Pulau Besar (4,6 m high) is located off the E coast of Johor and it is surrounded by many islets.

To preserve the unspoiled marine life, the Government has gazetted it as a marine park to protect around 60 species of marine life from any activity that can harm their natural habitats within 2 nautical miles around the island.

There are about 7 - 8 small villages that are still populated by around 100 friendly dwellers who are mostly fishermen.

There is no safe passage for vessels without local knowledge between Pulau Batu Besar and the mainland as the area is fouled by rocks, some above-water.
The sea is discolored by rips, which do not necessarily coincide with the shoals.
A rocky shoal, with a depth of 3.4m, lies almost 1 mile E of Pulau Batu Besar.

The channel between Pulau Besar and Pulau Dodol, the next island to the S, is fouled by a rock with a depth of 0.9m, which lies 0.3 NM N of the latter island.
The other channels between the islands are deep, but they should be avoided.

8.5nm
330°
Malacca island or Pulau Melaka is a man-made island in Malacca town. it's linking to the mainland by a 30 m bridge on a side and has a jetty on the other side.

5.9nm
324°
Pulau Panjang, a narrow, rocky flat almost covered at HW, lies 2 miles SSE of St. Paul’s Hill, and is steep-to on its S side.
A stone beacon stands on its E end and a lighted beacon on its W end.
5 Jan 12
Jojo

7nm
318°
Batu Gelama, a rock which covers at HW, is marked by a lighted beacon.
A narrow ridge with depths of less than 5.5m extends about 1 mile WNW and 0.3 mile ESE of the beacon.
Two 4.9m patches lie between the NW end of this ridge and the ridge extending SE from Pulau Upeh.
5 Jan 12
Jojo

7.7nm
324°
The town of Melaka (Malacca), capital city of the Malaysian state of Melaka, stands on both banks of the Melaka River which discharges about 6 miles E of Tanjong Keling, the two parts being connected by several bridges.
St Paul's Hill, wich is conspicuous, stands on the left bank ...
5 Jan 12
Jojo