The town of Veere is in Zeeland, near Middelburg on the - former - island of Walcheren, has a small picturesque harbour. Old fortifications have decided its lay-out, dominated by the huge bulk of the Church of Our Lady (or 'Grote Kerk'), which once provided barrack-space for Napoleon's troops, and graced by the elegant spire of its late-Gothic Town Hall.
Veere has now become a holidayresort, Boats come to these inland waters from many parts of Europe. It is linked to the sea by canal through Middelburg to Flushing (?Vlissingen) and the mouth of the River Schelde in the west. Non-tidal waterways to the north also enable bargetraffic and pleasure-craft to navigate through the Netherlands.
2007/12/31
Aggiornare
Zolys 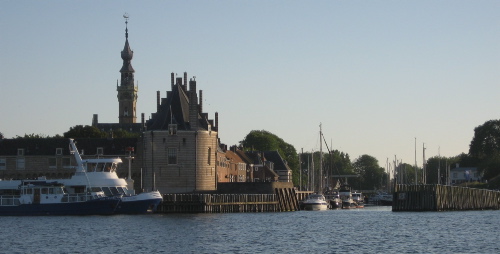 9.9nm
202°
Breskens provides for a stop-over for those who are too tired to already overtake the Westerschelde mouth crossing to Vlissingen (Flushing). Port control is accessible on VHF 14 and the harbour is accessible at all tides. Watch out for the wreck located close to the shore West to ...
17 Aug 16
hetzeilen