Pelican Point is the northern end of a long, low-lying peninsula of barren dune sand that forms the western side of Walvis Bay, protecting the bay from the Atlantic Ocean. In 1915 a small lantern was mounted on a wooden pole to mark the extremity of the peninsula. The present cast-iron tower was erected during 1931/2 and the dioptric revolving lens pedestal was commissioned in 1961. The light has a luminous intensity of 1,300,000 cd and is characterised by a group of three white flashes every 20 seconds.
2009/01/15
Aggiornare
anonymous 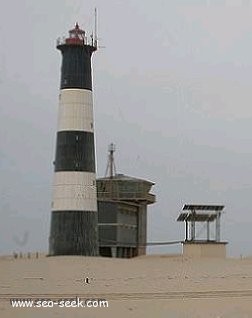 13nm
20°
Swakopmund was founded in 1892, by Captain Curt von François.On 4 August 1892 the crew of a gunboat named Hyäne (German for Hyena) erected two beacons on a large dune, probably in the vicinity of the present lighthouse. This is regarded as the founding date of Swakopmund.
15 Jan 09
anonymous

191nm
171°
The Namibian coast of the Kalahari desert stretches for more than 400 kilometers. There are many beaches filled with sand dunes.
22 Aug 15
Madri_2015

227nm
170°
Shark Island, or German Haifischinsel, is a small island off the coastal city of Lüderitz in Namibia which is used as a campsite for tourists.
16 Jan 09
anonymous