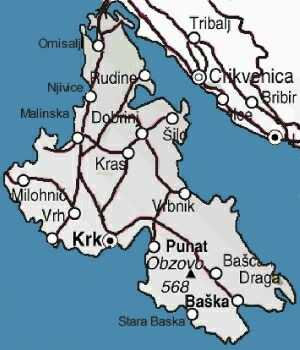 Krk (i Italian Veglia, in Latin Curicta) is a Croatian island in the northern Adriatic Sea. It is located in the Rijecki Zaljev, between the mainland at E and to W Otok Cres.
With its 405 km ² (exactly 405 218 994 m², very slightly smaller than Cres), Krk is the second largest island in the Adriatic area.
It is separated from the mainland by the Tihi Kanal, and is connected to the mainland by a bridge of two concrete arches since 1980. Measuring 1430 meters, is one of the longest concrete bridge in the world. Its vertical clearance of at least 50 m.
The N of the island is covered with crops and forests. The rest of Krk is a series of bare limestone hills.
The island has been inhabited since the tenth century BC. AD. The Romans called Curicta. -49 In September, during the Civil War, the bay has seen the fleet of Pompey defeat that of Julius Caesar.
More than a thousand years later, the island was the center of the dialect of the language végliote Dalmatian. She was also the seat of medieval bishops and a large nobility: the Frankopan.
The island has a small fishing fleet and an oil terminal in Omisalj. Tourism plays a role more important.
2011/08/2
Aggiornare
Jojo
Condividi i tuoi commenti o le foto su "Otok KrK Kvarner"