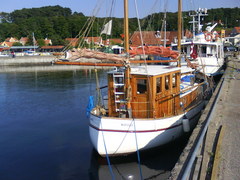 55nm
358°
Hirtshals Lighthouse1 January 1863 Hirtshals lighted beacon, which had taken the entire 2.5 years to build. Construction of the lighthouse was the culmination of a plan from 1854 when it was decided first to move the Skagen lighthouse and partly to build a new lighthouse at Hirtshals. ...
15 Dec 09
holger

37nm
152°
Sletterhage LighthouseHelgenæsOn the soutwestern ornaments of Helgenæs is Sletterhage lighthouse. Located  off  the gulf of Århus, Århus Municipality had set up a lighthouse here already in 1872, and this lighthouse was taken over by Lighthouse-administration in ...
15 Dec 09
holger

44nm
160°
Tunø Church
Tunø church listed in young gothic time (c. 1300). It is in the late Gothic period has been extended with a porch, west tower and a choir extension eastward. At the same time were inserted cross vault  in the original building, the church received its stepped ...
15 Dec 09
holger