The port of Quilon (Kollam) is a small roadstead lying in the bight close SE of Tangasseri Point. The N and S limits of the port are defined by lines extending in a 247° direction from two boundary pillars. The N pillar and the S pillar lie about 0.7 mile E and 3 miles ESE, respectively, of Tangasseri Point.
The W limit is defined by a line extending 180° from the point.

The port is protected by the Tangasseri Breakwater, extending about 1.1 miles SSE of Tangasseri Point. The breakwater was completely restored and strengthened in 2009 after tsunami damage that had occurred 5 years previous and now has a permanent road laid along the entire length. There is also a lee breakwater extending about 500m SSW of the old Post Office with a wharf, 116m in length, located at the W end of this breakwater.

There is a least depth of 8.9m in the fairway of the channel between the buoys and a depth of 8.6m about 0.2 mile SSE of the black buoy. The red conical buoy marks the NW end of a group of dangers, with a least depth of 6.4m, extending ESE.

The basin presently accommodates vessels up to a draft of 7m but there are plans (2009) to increase this to 10m.

Gamaria Rock, with a depth of 7m and marked close N by a black and white conical buoy, lies about 1.3 miles ESE of Tangasseri Point. The above buoys are in position from October to May. There is heavy surf along the steep beach fronting the bight and landing is dangerous except in native boats.

Between October and May, vessels can anchor in the inner anchorage, between Gamaria Rock and Pallikall Shoal, in about 9.1m, sand, with the red chimney of the tile works bearing 040°, and Tangasseri Light bearing 299°. A large vessel may find a position about 0.3 mile farther SW more comfortable.

0.6nm
273°
Tangasseri Point Light is shown from a concrete tower, 41m high, painted in black and white diagonal stripes, on the point. The point has been reported to be a good radar target at 17 miles.
The coast from close E of Tangasseri Point to about 3 miles NNW of it is rocky with groves ...
18 Mar 12
Jojo

4nm
325°
Nindakara (Neendakara) is an open roadstead port at the entrance to Ashtamudi Backwaters.
At the entrance of that fishing port, two breakwaters shelter a shallow basin, with jetties on its N side where barges load ilmenite sand. The entrance can be identified from seaward by a ...
18 Mar 12
JoÃÂÃÂ«lle 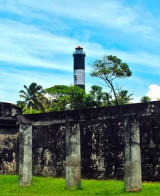 17nm
139°
Anjengo, formerly of importance but now a fishing village, is seldom visited as its anchorage is exposed to the surf at all times. It is not easy to identify, even from a short distance, as the fort and other buildings are low and screened by trees.
A light shows at a height of ...
18 Mar 12
Jojo

32nm
140°
Trivandrum (Thiruvananthapuram), the capital city of the state of Kerala, lies about 1 mile from the coast. The ruins of a pier, extending to the LW line, are prominent on the coast S of the city.
Trivandrum is a lighterage port with no docking facilities available.Pilotage is ...
18 Mar 12
JoÃÂÃÂÃÂÃÂÃÂÃÂÃÂÃÂÃÂÃÂÃÂÃÂ 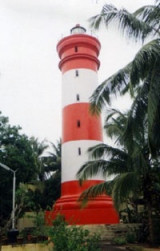 39nm
337°
Alleppey (Alappuzha) lies about 29 miles S of Kochi (Cochin. The coast between the ports is low, sandy, thickly fringed with palms, and densely populated.
Alleppey Light is shown from a white, round, masonry tower, about 0.3 mile E of the root of Alleppey Pier. As the town of Alleppey ...
18 Mar 12
JoÃÂ«lle

38nm
141°
Kovalam Point (Covelong Point) is a bluff point with a conspicuous red-roofed building on it.
Good radar returns have been reported from the point at 19 miles.
KovalamBeach is probably the best known surf spot in India.
19 Mar 12
JoÃÂÃÂÃÂÃÂÃÂÃÂÃÂÃÂÃÂÃÂÃÂÃÂ