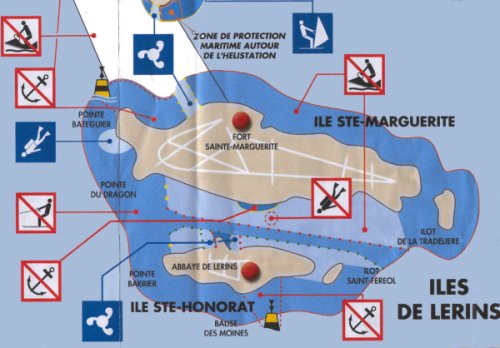 Ile Saint-Marquerite, the bigest island close to the city of Cannes, lies centered 1 mile SSE of Cap de la Croisette and is very wooded. A conspicuous citadel, in which there is a disused signal station, stands near the middle of the N coast of the island. A small shipyard is situated close W of this citadel.
The NW extremity of the island is surmounted by a ruined tower. It is fronted by a shoal, with depths of less than 2m, which extends up to 0.3 mile N and is marked by a lighted beacon.

A shoal, with a depth of 8.6m, lies about 0.3 mile NW of the beacon and the sea breaks on it during S winds. The E extremity of the island has the ruins of a battery standing close WSW of it. A low islet lies close E of this point and is connected to it by a ridge of rocks.

Speed limit to 5 knots around the islands.