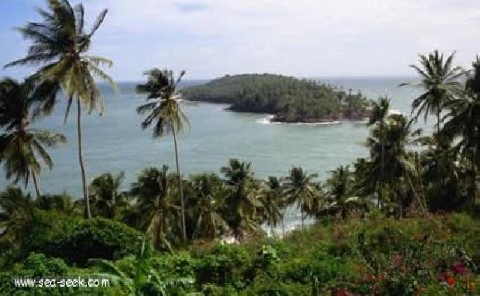 Île du Diable part of Salut islands is better known as Devil's Island. The total area is 0.62 km2 (62 hectares) The islands were used as a penal colony from 1852 onwards, earning them a reputation for harshness and brutality. This system was gradually phased out and has been completely shut down since 1953. Nowadays the islands are a popular tourist destination. The islands were featured in the novel by Henri Charriere, 'Papillon'. He was imprisoned here for 9 years.

Devil’s Island is the most isolated and inaccessible of the three islands. Visitors are not allowed on Devil’s Island.  It now hosts a radar station for space launches.
2016/01/20
Aggiornare
Joëlle
Condividi i tuoi commenti o le foto su "Devil's Island"

0.3nm
218°
Îles du Salut, 3 in number, are  located about 7 NM NE of Pointe Charlote.Ile du Diable, the northernmost, is 40m high. Ile Royale, 66m high, is the largest and westernmost, while Ile Saint-Joseph, only 30m high, is the southernmost.

0.5nm
189°
Anchorage can be taken in the bight formed by the S side of Ile Royale and the W side of Ile Saint-Joseph.
20 Jan 16
Joëlle

84nm
288°
Pointe des Hattes marks the N limit of the French Guiana and the separation with Suriname country.
20 Jan 16
Joëlle

81nm
130°
Cabo Orange (cape Orange) is a cape on the N coast of Brazil, separated from the coast of French Guiana by a large bay watered by the estuary of the Oyapock River Cape Orange is the northernmost point of the Brazilian state of Amapá. It is located in an area of tidal marshland protected ...
10 Jan 16
Joëlle