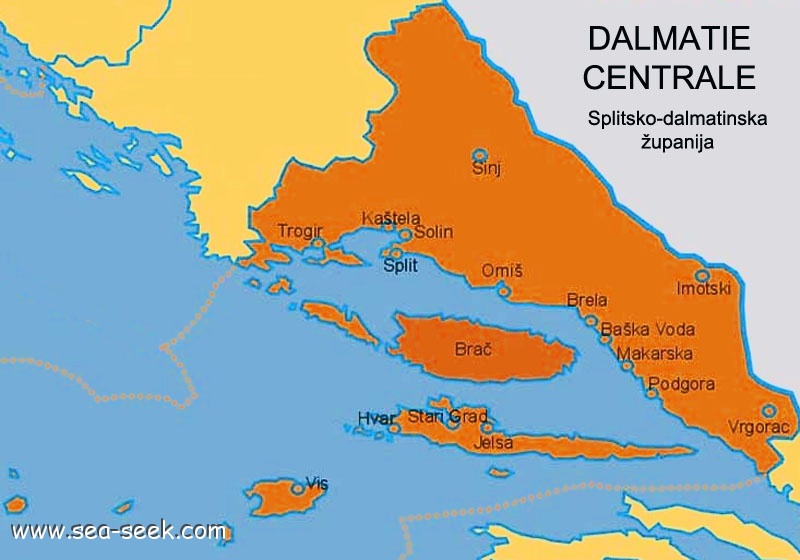 Split Dalmatia county covers theS  part of Dalmatia. The main town is Split, Croatia's second largest city by population and it is the largest city in Dalmatia.
Split is situated on a peninsula between the part E of the Gulf of Kastela and the Split Channel.
The city is a prerequisite to many surrounding islands and the peninsula of the Apennines. It is therefore a major tourist destination.
Split is also one of the oldest cities in the region. It is generally accepted that its roots dating back to 1700 years at the time of the ancient Greek colony of Aspalathos (6th century BC).
Natural Park Biokovo (second mountain range of Croatia) is located along the coast between the rivers Cetina and Neretva. This coastal area with unique natural qualities extends from Brela to Gradac on a length of about 50 km. It is a succession of beaches, forests, cultivated landscapes of a mountainous background.
The island of Hvar is the queen of the Dalmatian islands. It has been known since antiquity because of its important strategic position. It has many ports and anchorages with offshore islands (Pakleni and O. Scedro).
Among the many monuments to visit we note the Cathedral, the former Arsenal and noble palaces (Gothic and Renaissance styles).
Makarska is a small town on the Adriatic coast about 60 km south of Split and 140 km northwest of Dubrovnik. Its tourist center is located on a bay in the shape of a horseshoe between the mountains and the Adriatic Sea Biokovo.
Located less than 30 km west of Split, Trogir is a port on the Adriatic. Its historic center, declared World Heritage by UNESCO in 1997 is located on a tiny island located between the mainland and the island of Ciovo.
2011/08/4
Mettre à jour
Jojo
Partagez vos remarques ou photos sur "Splitsko-dalmatinska županija (Split-Dalmatia County)"