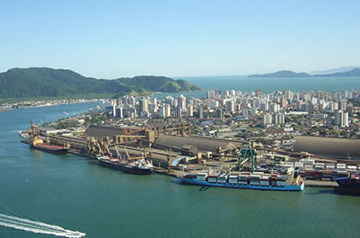 Santos lies some 230 NM SW of Rio de Janeiro and is Brazil's biggest and most important port. The city lies partly on the island of St Vncent, and partly on the mainland. This is not an attractive stop but useful for repairs.
The port of Santos is located in the city of Santos, state of Sao Paulo. It is the busiest container port in Latin America.

The approach channel has been dredged (2012) to a depth of 13.5m. It was reported that silting may be present in the channel and harbor and that depths may be less than charted.

A continuous line of quays front the E and N side of the port for a distance of 5 miles starting about 0.7 mile NE of Ponta da Praia.
The Estuario Wharf (Berths 25 to 35) has alongside depths of 9 to 12m and a length of 1,980m. A submerged mole, with a depth of 11.4m, lies between Berth 28 and Berth 29.
The Dow Chemical Terminal consists of a quay 265m long, which can handle chemical and petroleum vessels up to 45,000 dwt and 11m draft.

A buoyed channel, 100m wide, leads from the harbor channel to the turning basin abreast the wharf at the Alemoa Refinery.

Yachting facilities are not located on the mainland but across the Canal in Guaruja, on the island.

It is possible to anchor in main river but itis not recommended unless going ashore on the Santos side.

Approach from SW is straightforward with Santos Bay easily identified by the ships at anchor. The buoyed channel leads into the Estuario de Santos. The tidal stream can reach 1.5 knots in either direction. From the NW, there are off-lying dangers which cannot be seen.

From the south at night, picking up eading line No 1 on 021° can be difficult against city lights background.

There are moorings at the International Yacht Club, the Estaleiro Supmar, and Santos Yacht Club, although unfortunately Santos YC does not permit visiting yachts to use their facilities (restaurant and pool etc.).

2.8nm
151°
Call prior to arrival. Visitors' dock. All facilities including haul out and a boatyard with all services. Small supermarket on site. Fuel berth. Note that the restaurant, bar, swimming pool and tennis courts are for members only and visitors are not permitted to use these facilities.

119nm
66°
Enseada de Aracatiba is entered between Ponta Grande, 2.5 miles ENE of Ponta Acaia, and Ilha Longa, 1 mile NE and close offshore.
Anchorage is available in the bay, with good shelter, about 0.4 mile S of the W end of Ilha Longa, in a depth of 21m, mud.
18 Jan 16
Joëlle

121nm
66°
Enseada de Sitio Forte is entered between Ponta Grossa de Sitio Forte, about 2 miles NE of Ilha Longa, and Ponta Aripeba, about 1 mile farther E. The head of the bay is formed by a small cove, the W side of which is foul.

137nm
64°
Baia de Mangaratiba is entered between Ponta do Bispo and Ponta da Cruz. This shallow bay is exposed to the sea, which breaks heavily on its NW shore. The town of Mangaratiba stands on the E side of the bay and has a small concrete pier.
Laje de Mangaratiba, low, dark-colored, ...
18 Jan 16
Joëlle

123nm
63°
This club, set across the Bay of Angra from the town, is the most protected anchorage in the area.
All facilities of well appointed club with small boatyard with GRP, wood and metal repair facilities. ...
16 Jan 16
dedeonen