Car Nicobar island, or PU in the local langage, the N island of the group, lies about 77 miles SSE of Little Andaman Island.
The island is densely wooded, mostly coconut trees.

The island has been reported to be a good radar target up to14 miles.

The Car Nicobar is a very small Island, if compared with the Middle Andaman or South Andaman. The area of Car Nicobar Island is around 127 Sq km. There are clusters of 15 villages, which are inhabited areas, the largest being Malacca.

The Car Nicobar Island was ravaged by the 2004 tsunami. Car Nicobar lies 750 km (465 miles) from the epicenter of the 2004 Indian Ocean earthquake, and the resultant tsunamis struck it with immense force and witnesses reported that the waves were as high as 30 ft (9 m).
As of December 30, 2004, the number of casualties is actually unknown, but seemed likely to be high. One survivor told the Associated Press that there was not a single hut, which was standing. Most of the people went up to the hills and were afraid to come down. 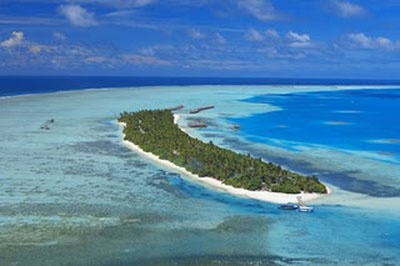 46nm
159°
Chowra Island, which lies about 24 miles SSE of Batti Malv Island, is generally low but rises to a 104.5m high rocky pinnacle at its S end.
The island looks like a hat from the offing. Sanenya, the principal village, lies on the NE coast.
It has area of 8.2 sq km with a population ...
28 Nov 11
Jojo

21nm
167°
Batti Malv Island (or Kuono), which lies about 17 miles SSE of Car Nicobar, appears wedge-shaped from the offing. It's an uninhabited island that covers an area of 2 square kilometers. This very small island rises to a densely wooded peak about 73m high. The NW end of the island is ...
28 Nov 11
Jojo