The Islas Canarias, also known as the Canary Islands are an archipelago which consists of seven principal islands and extends in an E-W direction for over 240 miles. The E island of the archipelago is located approximately 55 miles WNW of Cabo Juby, the NW extremity of Africa; a clear channel lies between.
Isla de Tenerife and Isla de Gran Canaria are considered to be the most important of these islands and provide the main seaports, an international airport, and the largest tourist trade.
The islands are generally high with lofty volcanic peaks, some of which attain heights great enough to be snow covered for a considerable part of the year.
La Palma, the NW island, rises to Caldera de Taburiente, the famous crater. It is the biggest crater in the world, measuring approximately 9,000m in diameter and having a maximum depth of 707m.
Pico de Teide, the highest mountain in the archipelago, rises to a height of 3,718m near the middle of Isla de Tenerife and presents an imposing appearance in clear weather.
The coasts of these islands are mostly cliffy and are only occasionally broken by bays or sandy beaches. They afford little shelter in strong winds except at Santa Cruz de Tenerife, SantaCruz de la Palma, and Puerto de la Luz (Las Palmas) at Isla de Gran Canaria. All of the channels between the islands are safe and clear.
Generally, the lee side of these islands offers calms which extend 15 to 30 miles offshore; however, in bad weather, local squalls may be experienced which come on with little warning.
2011/07/25
Mettre à jour
Wikiadmin2
Partagez vos remarques ou photos sur "Canarias" 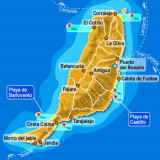 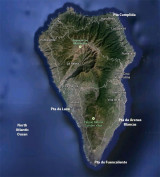 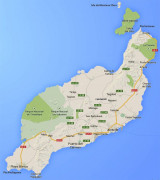 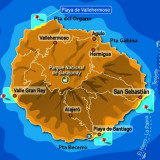