This port is located at about the midway point in Colombia's Pacific coast. It has the reputaion of being one of the most violent cities in the country.
It's a port of entry.

Great care needs to be taken in this bay due to the number of logs and other debris washed into it from the surrounding rivers.

The port should not be approached at night as the large number of un-marked fishing nets are impossible to see in the dark.

There are several marinas here, mainly for sports boats. 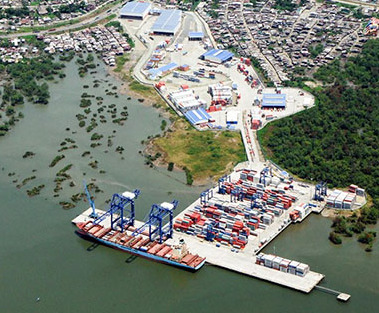 128nm
352°
National park with a park fee and anchoring fee.
There is a small military force stationed here to watch the coast.
The bay offer a very good protection.
8 Jan 16
Joëlle

142nm
352°
Approching, keep more than 2 NM off Punta Solano because of off lying rocks.

170nm
351°
Just North of bahia Solano is bahia Cupica.
When approching be very carefull of punta Cupica. Rocks can be found as far as two miles of the land.
Bay open to the S, si it is best visited during the dry season or when the winds are coming from the North.
8 Jan 16
Joëlle

160nm
219°
This interesting, friendly town is on the border with Ecuador. It sits on an island connected to the mainland by a causeway. Many of the houses in the area are built on stilts over the water.