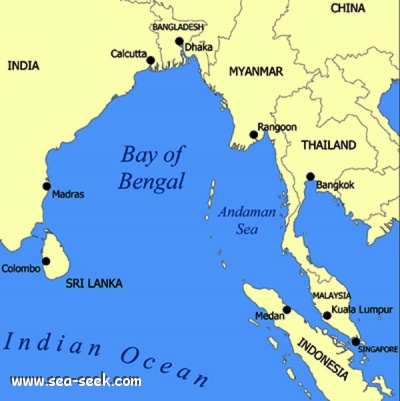 The Andaman Sea (or Burma sea in Thai)  is a body of water to the southeast of the Bay of Bengal, south of Myanmar, west of Thailand and east of the Andaman Islands; it is a part of Indian Ocean.

The sea has been traditionally used for fishery and transportation of goods between the coastal countries and its coral reefs and islands are popular tourist destinations.

At its southeastern reaches, the Andaman Sea narrows to form the Straits of Malacca, which separate the Malay Peninsula from the island of Sumatra.

On the Southwest. A line running from Oedjong Raja in Sumatra to Poeloe Bras (Breuëh) and on through the Western Islands of the Nicobar Group to Sandy Point in Little Andaman Island, in such a way that all the narrow waters appertain to the Burma Sea.
On the Northwest. The Eastern limit of the Bay of Bengal [A line running from Cape Negrais (16°03'N) in Burma through the larger islands of the Andaman group, in such a way that all the narrow waters between the islands lie to the Eastward of the line and are excluded from the Bay of Bengal, as far as a point in Little Andaman Island].
On the Southeast. A line joining Lem Voalan in Siam [Thailand], and Pedropuntin Sumatra.

The andaman sea is with a good reason one of the top 50 dive sites in the world, why? simple because the encouters in this waters are just amazing like the country part of the andaman sea belongs to, thailand.
With the group of similand island national park and marine santuary, the dives in this areas are spectacular and unpredictable, whale sharks manta rays and different kinds of shark easly are spotted here, plus a huge quantities of tropical fishes coral formations and so on.
Diving in this waters is a dream for all kind of divers, the perfect surrounding also are a perfect frame for dive safaries, krabidivers.com is the specialist of the andaman sea, since year 2000 the staff of krabidivers.com has been diving in the andaman sea, an extended experience in this areas, makes krabidivers.com the best choise for sout east asia diving centers. Contact for more info http://www.krabidivers.com
2011/11/21
Mettre à jour
Jojo

210nm
311°
The Andaman Islands are a group of Indian Ocean archipelagic islands in the Bay of Bengal, between India to the west and Burma to the north and east. Most of the islands are part of the Andaman and Nicobar Islands Union Territory of ...
11 May 12
Joëlle

323nm
129°
The coast between Ko Phuket and Pulau Pinang, 180 miles SSE, is generally low with some hills near the mountainous island of Pulau Langkawi. Islands and islets project widely from the coast, fringed by a coastal bank covered by little water.
The mouths of rivers are generally encumbered by bars.
22 Nov 11
Jojo

377nm
3°
From Cape Negrais, the coast of the Irrawaddy Delta is low along its entire length between the Bassein River and the Sittang River. The only high coastal ground lies on the W side of the mouth of the Bassein River; here the S extremity of the Arakan Yoma Range terminates in the vicinity ...
21 Nov 11
Jojo

178nm
221°
The Nicobar islands archipelago are situated south of the neighboring Andaman Islands archipelago, in the eastern Indian Ocean. It is separated from Taïland to the E by the Andaman sea and it is composed of three groups.
The northern group includes:Car Nicobar (127 km²)
Batti ...
30 Nov 11
Jojo

276nm
169°
North Sumatra stretches across the island between the Indian ocean and the Strait of Malacca. It borders Aceh province on the northwest. The province contains a broad, low plain along the Strait of Malacca on which the provincial capital, Medan, is located. In the south and west, ...
17 Jan 12
Jojo