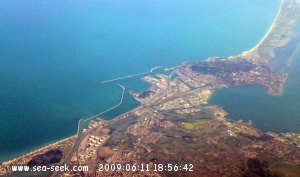 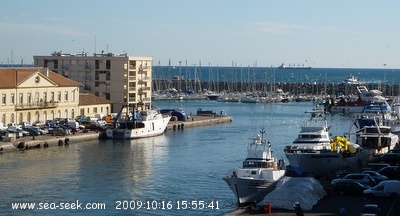 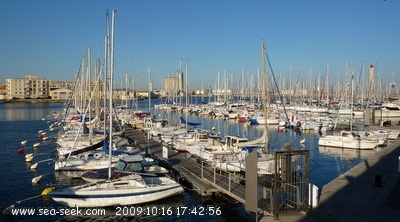 The port of Sete lies 11 miles NE of Cap d’Agde and consists of three sections. An outer harbor and a series of connecting basins and canals in the N part, an industrial zone within Etang de Thau, and an offshore terminal berth.
The harbor lies at the foot of the E slope of Mont de Sete (Mont Saint-Clair). This hill, 180m high, dominates the area and is covered by houses. A television mast, a cross, and a statue stand near its summit.
Mont Saint-Clair Light is shown from a white octagonal tower with a dark green lantern, 19m high, standing on the SE slope of the hill. Citadelle Richelieu, with a signal station at its S end, is situated close NE of the light. A microwave relay mast stands near the lookout station. A conspicuous steeple, surmounted by a golden figure of the Virgin, stands in Sete, near the harbor.
Montagne de la Gardiole, 180 to 240m high, extends between 4 miles and 10 miles NE of the town and terminates in a distinctive peak surmounted by a prominent chapel. A watch tower at Pioch de Camille is prominent. The chimneys of an industrial zone, standing at the foot of this range, can be seen to the NNE of the port. A flare, a large square steeple, and numerous oil tanks are situated at Frontignan, 3.5 miles NE of the port. A noticeable quarry lies 1 mile N of Frontignan.
A lighted approach buoy is moored about 12 miles SE of the harbor entrance.
A sector light is shown from a structure standing in the SW part of the harbor and aids in the approach to the entrance.
2012/04/29
Actualizar
Atb 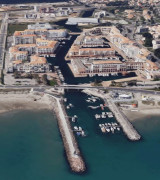